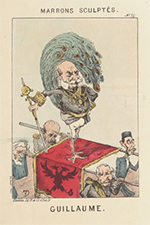 More information on the Cambridge Franco-Prussian caricatures can be found on the European languages across borders blog and in this special feature.