The noblest mind the best contentment has." 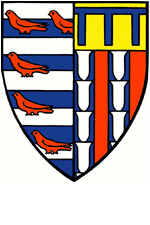 Pembroke College, founded in 1347 by Marie de St Pol, Countess of Pembroke, is proud of its traditions. The third oldest of the Cambridge colleges, it was the first to have its own Chapel which is now the Old Library. The present Chapel (Christopher Wren’s first building) was thanks to his uncle, Matthew Wren, who vowed during his imprisonment in the Tower that he would devote part of this fortune to some holy purpose.

Who could have thought that men would execrate
That gentle grave young visage?  Eighteen years
A prisoner to their unforgiving fears,
He walk’d the equator’s length on Tower gate.
Our chapel dower’d with a fair estate,
First sample of his nephew’s mighty skill,
It’s altar-gear, and every cushion still
His late-won liberty commemorate.

During his time as a Fellow, Matthew Wren compiled a Benefactors’ Book of Pembroke’s growing book collection donated by many of Pembroke’s illustrious alumni.  Chief among these was Lancelot Andrewes, one of the translators of the King James Bible, who bequeathed his library of some 300 early printed books, which forms the core of Pembroke’s collection.  The Library’s medieval manuscripts are housed at Cambridge University Library, where they may be consulted, but the College keeps a collection of incunabula and around 30,000 rare books. The current Library building was designed by Alfred Waterhouse in the 1870s.

In order to make the College’s collections more accessible, we are hoping to make some of our unique items available digitally, starting with the Album Amicorum, an early autograph or ‘commonplace book’, and one of Pembroke Library’s most valuable and beautiful treasures, Matthew Wren's Benefactors' Book, and three of E.G. Browne's diaries, whose digitisation is described in the short video below.