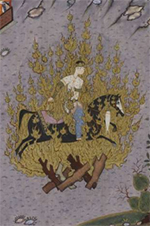 Welcome to the Shahnama Project

Welcome back to the Shahnama Project website, which has been under transformation for some months while being transferred to a new platform in the Cambridge Digital Library. This is the small first launch of a test run of the new site, which will remain a work in continuous progress for several months, with regular updates and refinements as data and functionality is carried across from the old site. Please remain patient! All comments welcomed.

This site brings you a massive collection of manuscripts of the Shahnama and a display of the miniature paintings in each one. It allows you to see and compare all the different depictions of a particular scene in the narrative and to explore text-image relationships across the corpus.

Firdausi’s Shahnama (Book of Kings, or King of Books), completed in eastern Iran in around A.D. 1010, is a work of mythology, history, literature and political ethics: a living epic poem of around 50,000 verses that pervades and expresses many aspects of Persian culture. Thousands of manuscript copies of the text, the earliest dating from 1216, exist in libraries throughout the world. Many hundreds of these are illustrated with miniature paintings, some of them among the most magnificent masterpieces of the Persian arts of the book.

In 1969, Jill Norgren and Edward Davis produced the Preliminary index of Shah-nameh illustrations, under the supervision of Oleg Grabar. This lists – but does not illustrate – almost 5,000 paintings; the true number is nearer four times this figure. Such a large body of pictures is beyond the capacity of individual scholars to study and manipulate by traditional means; this is where the internet can make an enormous contribution. The Shahnama Project has aimed to build on this preliminary work and to provide a corpus of illustrations of the Shahnama, with details of the manuscripts and the textual context within which they occur. This powerful resource opens the door to almost limitless areas of study and comparative analysis. Why did the Shahnama continue to attract such attention, which scenes did the artists and their patrons choose to depict, and which to ignore? Do the paintings conform with the text and illuminate it, or present a different message? How was the Shahnama received by later generations of writers and artists and how did it fuel the production of related works and their illustration?

The Project was initiated with a five-year major research grant from the Arts and Humanities Research Board (AHRB) awarded Charles Melville at the University of Cambridge, in collaboration with Robert Hillenbrand at the University of Edinburgh, to produce an electronic corpus of paintings in Shahnama manuscripts. Work started in October 1999 and the first period of research was completed in September 2004, with the launch of the Shahnama Project web site. A Resource Enhancement grant from the AHRC for the development of the website ran from March 2006 to April 2009. Funding has since been sporadic, but for a major benefaction from Bita Daryabari in 2013 that has ensured its sustainability under the auspices of the Shahnama Centre at Pembroke College.