'Chronometer' came into use in the eighteenth century, as the term for timekeepers designed to be used at sea. First used by the clockmaker William Derham in 1713, the word was picked up by other projectors, notably the potential Scriblerian scam Jeremy Thacker [link] , in 1714 soon after the passage of the Longitude Act [RGO 14/1:10r]. Over the course of the century, and particularly as a result of the work of the Board of Longitude, chronometer came to be the standard technical name for marine timekeepers.

Timekeepers were listed by Isaac Newton, as one potential solution to the longitude problem, in his advice to the House of Commons [BGN:1:1] during the passage of the 1714 Act. Yet, despite this, and the early use of the word chronometer, their history for the Board really started with John Harrison in the 1730s. Harrison developed three consecutive large-scale timekeepers - now known as H1 [

] in the much smaller form of a watch - now known as H4 - which was sent on two trials to Jamaica and Barbados ( [ADM/L/T/22] and [ADM/L/T/23]). The Logbooks [ADM/L/C/82] for the Lisbon and Barbados trials are in the National Maritime Museum. H4 performed exceptionally well on the voyage and led to Harrison being awarded half of the great reward by an Act in 1765 [RGO 14/1:29r]. Harrison's creation of this watch is the foundation of all subsequent chronometer developments.

After 1765, Harrison and the Board began to consider how his watch could be made practical at sea; how in effect it could become a marine chronometer, as we understand the instrument today. Harrison's increasingly acrimonious relationship with the Board is shown in his 'Harrison Journal' and in the Board minutes [RGO 14/5:86]. All four timekeepers were sent for trial at the Royal Greenwich Observatory [RGO 4/311] by the Astronomer Royal Nevil Maskelyne. This was also a fraught process recorded in detail by Maskelyne in preparation for publication, and discussed in letters both to his family [REG09/000037:5:17] and to other Commissioners [SAN/F/4]. His conclusion that H4 did not keep time sufficiently accurately to be relied on at sea, was one of the results responsible for Harrison's break with the Board in the 1770s. Attention then moved to the question of how to make such chronometers cheaply and reliably useable at sea.

In 1769, the watchmaker Larcum Kendall was commissioned by the Board of Longitude to make a replica of John Harrison's H4. The time-keeper cost the Board of Longitude £450 and was sent, alongside three time-pieces made by the London watchmaker John Arnold, on Captain Cook's second voyage of exploration to the 'South Seas' in 1772. Though Cook noted in his journal that he thought highly of the watch made by Kendall, the two astronomers who had been tasked with testing the going of the time-pieces on the voyage – William Wales on HMS Resolution and William Bayly on the Resolution – reported that the performance of all four of the timekeepers had been incredibly erratic.

Uncertainty over the potential for a marine chronometer to be a valid solution for solving Longitude at sea persisted well into the 1830s. From the 1780s, chronometers made by John Arnold and Thomas Earnshaw began to be bought by East India Company officers and carried with them on routine voyages around the Cape of Good Hope. Arnold and Earnshaw sought after and made public written testimonies from customers stating the successful going of their time-pieces. At the same time, however, detailed accounts from voyages of exploration added weight to critics who were casting doubt over the capacity for timekeepers ever to be consistent enough to provide a reliable method for finding Longitude. Indeed, by 1780, several of Kendall's and Arnold's timepieces had been tried on voyages of exploration, without any agreement between members of the Board of Longitude or general commentators on the best use of the state's finances, that providing money to clock and watchmakers to develop a reliable time-piece was a secure investment. Between March 1771 and March 1781, the Board had paid John Arnold £1,700 towards his endeavours to bring to perfection an improvement of a watch or timekeeper that could successfully be tried at the Royal Observatory at Greenwich. Yet no successful trial had actually been carried out. In 1780, in order to answer criticisms of the apparent waste of having spent large sums of money to develop a successful timekeeper, Joseph Banks and Alexander Dalrymple advanced a definition of 'chronometer' that accepted that timekeepers at present were not 'perfect', but were in themselves incredibly valuable which should not be compared to unrealistic ideas of perfection. Dalrymple argued that: 'The Machine used for measuring Time at Sea is here named Chronometer, my friend Mr. Banks agreeing with me in thinking so valuable a Machine deserves to be known by a Name, instead of a Definition. The name Time-keeper is only proper to a perfect Chronometer.' (Alexander Dalrymple, Some Useful Notes Useful to those who have Chronometers at Sea (London, 1780), p. 1.)

While this definition of the term chronometer did seem to allow for clock and watchmakers like John Arnold to justify receiving support from the Board of Longitude for improving their timepieces, it also meant that what was expected from a method for finding Longitude to receive a large reward was not clear. By the 1790s, the Astronomer Royal Nevil Maskelyne, felt the need to defend himself against accusations by watchmakers to be unwilling to give them a fair trial, after the trials of Thomas Mudge's timekeepers at the Royal Observatory suggested that they were not accurate enough. From the late 1790s until 1808, the Board of Longitude had to try to manage rival claims from John Arnold's son, John Roger Arnold and Thomas Earnshaw. In these debates, the Board demonstrated that a concern for them was not simply the technical competency of timekeepers, but also the ability for the clock and watchmaking trade to produce timekeepers at an affordable cost and at a decent rate to enable a supply to British ships.

It took a long time for marine chronometers to become adopted as an essential instrument for every British vessel. By 1821, it is thought that the Royal Navy owned roughly 150 chronometers. In that year, John Pond the Astronomer Royal carried out the first chronometer trials at the Royal Observatory, for which the maker of the chronometer that won first prize received £300. As late as 1832, the author of 'A very brief account of the Chronometer', wrote that 'the very general adoption of the Chronometer, particularly in long voyages, is the best proof of its value; and it is more than probable, that, in a very few years, no vessel will sail without one'. (Parkinson and Frodsham, A Brief Account of the Chronometer (London, 1832), pp. 1-2).

Katy Barrett
History and Philosophy of Science
University of Cambridge

Eoin Phillips
History and Philosophy of Science
University of Cambridge 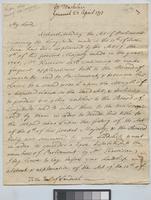