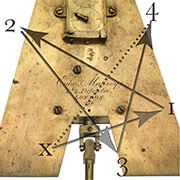 Dead reckoning was used for centuries as a way of estimating a ship's position at sea. It was based upon the vessel's previous positions and on regular estimations of its speed and course direction. The course direction was taken by magnetic compass, and the speed by the use of a log and line. The ship's 'log' was typically a timekeeper - traditionally a sandglass or hourglass and later clocks or watches alongside sandglasses. It was used to time the letting out of a thin line, knotted at regular intervals, over the ship's stern. The speed of the ship after one hour was proportional to the length of line which was run out in 28 seconds. The estimated future course could then be plotted mathematically or by hand onto a chart.

Error would build up during this process because of errors made in the estimations of the previous positions and through ignoring the effect of water currents and winds. However, it was still the best approach available to navigators for centuries. (It became less important after the late twentieth-century spread of Global Positioning System [GPS] satellite technology.) When new navigational technologies and methods for estimating latitude and longitude were developed, these were used as a complement for or correction to dead reckoning. Before the eighteenth century, such improved technologies included the astrolabe, quadrant, cross-staff and backstaff. During the eighteenth century, John Hadley and Thomas Godfrey each invented the octant in about 1730. A number of other new or improved technologies and methods came about during the 1700s under the auspices of the Board of Longitude. At the end of the 1750s, John Bird worked with the Board to turn the circular instrument suggested by Tobias Mayer for making lunar-distance observations into the sextant. The next decade saw the peak of John Harrison's innovative work on marine timekeepers, and Nevil Maskelyne began to improve and standardize the lunar-distance method.

Even then some people still sought opinions, assistance and rewards from the Board for improvements to dead reckoning as well. An example is in RGO 14/31, a volume of correspondence from between 1790 and 1828 about general improvements to navigation. Francis Higginson, a Romantic novelist from Ireland, wrote in 1828 [RGO 14/31:270] to propose new instruments to aid in finding latitude and longitude by dead reckoning. One can also often see the fruit of dead reckoning alongside other navigational techniques in the records from specific voyages which are among the digitised volumes. For example RG 4/150 [RGO 4/150] - Nevil Maskelyne's journal of 1761 from his voyage to St. Helena to observe the transit of Venus - includes tables comparing his longitude calculations by lunar-distance to the results of dead reckoning. There were also later suggestions for devices which might replace some of the functions of the dead reckoning process. One of these, Edward Massey's 'mechanical log' for measuring the distance travelled by a ship, can be seen [

] at the National Maritime Museum.

Alexi Baker
History and Philosophy of Science
University of Cambridge