John Harrison was a carpenter and clockmaker from Barrow-on-Humber in Yorkshire. Together with his son, William Harrison, he designed and built four unique timepieces intended to find a means of keeping time accurately at sea. This was one of the methods for finding longitude considered by the Board of Longitude, as minutes of time can be converted to degrees of longitude travelled. The Harrisons moved from Barrow to London in the 1730s, spending the next 40 years working on their timepieces in consultation with the Board. Their interaction generated a number of parliamentary acts, as well as publications and correspondence. Two of their time-keepers, now known as H1 and H4, were sent on trials to Lisbon and the West Indies (Jamaica and Barbados) respectively. In 1773, Parliament eventually voted them the equivalent of the 'great reward' established by the Longitude Act of 1714 [RGO 14/1:10r]. The Harrisons therefore came closest of anyone to gaining the longitude reward.

The Harrisons are the most famous and contested figures in the longitude story, due as much to the beauty and intricacy of their timepieces, as to a book by Dava Sobel published in 1995. Sobel told the story of the Harrisons' conflicted relationship with the Board, and especially with one of its members, the Astronomer Royal Nevil Maskelyne. As far as the Board of Longitude archives are concerned, however, the Harrisons are mostly notable for their absence. Their arrival in London and request for a trial for their first timepiece (H1) was the first real impetus for the Commissioners of Longitude to meet, and it was their ongoing interaction which instigated the development of Board meeting minutes and accounts. The 'Harrison period' of the Board's activity therefore has comparatively little documentation. What there is relates to the minutes [RGO 14/5] from infrequent meetings, the Acts [RGO 14/1] passed to grant the Harrisons development or prize money, and the costs of related publications [RGO 14/15].

Instead father and son appear in related materials. The papers of Nevil Maskelyne, split between the Cambridge University Library and the Greenwich Museums, show Maskelyne's observations on the voyage to Barbados [RGO 4/321] where he was responsible for establishing the longitude of the island astronomically, in order to compare this to the watch (H4). They also include his observations on Harrison's disclosure [RGO 4/152] of the working of H4 and his tests on all four time-keepers [RGO 4/311] at Greenwich. Many of these are then discussed in his correspondence with other Commissioners. Logbooks from the royal naval ships, HMS Centurion ( [ADM/L/C/82]), Orford ( [ADM/L/O/27], [ADM/L/O/28] and [ADM/L/O/29A]) and Tartar ( [ADM/L/T/22] and [ADM/L/T/23]), on which the trials were conducted, show the day-to-day readings of the time-keepers at sea. Letters [ADM/A/2528] written to the Admiralty show the process of paying money to Harrison. Papers belonging to other Commissioners - Viscount Barrington [BGN] and Lord Sandwich [SAN/F/2] - as well as to the Harrisons themselves, show the increasingly angry nature of their interaction. Above all, the four timepieces themselves, H1 [

] remain at Greenwich as lasting testament to the perseverance and ingenuity of John and William Harrison.

Katy Barrett
History and Philosophy of Science
University of Cambridge 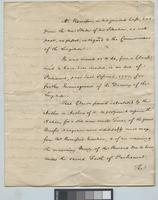