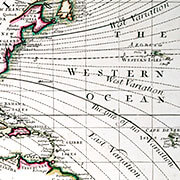 In the seventeenth and eighteenth centuries magnetic variation was one of the solutions for finding longitude at sea. It used either the variation of the compass needle in pointing due north, or the dip of the needle from the horizontal, at different places of the globe. The idea was that such variation could be mapped into lines that sailors could then use to navigate. Magnetic variation as a solution to the problem of finding longitude at sea predates the existence of the Board of Longitude, yet the Board rarely took it seriously. However, an interest in plotting the earth’s magnetic variation outlasted the Board and was one of the projects that it was heavily involved with in the nineteenth-century, particularly with the Commissioner’s support for Edward Sabine and his magnetic crusade.

The Board of Longitude and its commissioners were met by a wide and eclectic range of schemes related to magnetism and magnetic variation. The first evidence that we see of this can be found in the papers of William Whiston who proposed a scheme for longitude at sea by variation in magnetic dip [MSS/79/130.2] in 1719. Whiston was awarded money by the Board of Longitude at its second meeting [RGO 14/5:6] in 1742 for his scheme to survey the British Coastline using magnetic dip. This funding came at the same time that the Board awarded John Harrison his second grant; the £500 given to Whiston was the result of a clause in the 1714 Act which allowed half of the ‘great reward' to be given if a solution was shown to improve ‘the Security of Ships within eighty Geographical Miles of the Shores, which are Places of the greatest Danger'. Whiston was the only contributor to profit from this clause, and claimed in 1738 that he was responsible for its inclusion in the original Act.

The Board received an incredible amount of correspondence during its lifetime and there was a steady flow of references to magnetic dip and inclination. There is correspondence [RGO 14/29:226] between the Board and William Bain of Edinburgh in 1817 regarding his thoughts on magnetic variation, about which he published 'An Essay on the Variation of the Compass' in the same year. The majority of the correspondence is held in two volumes that George Airy dedicated to correspondence on magnetic variation, when organising the Board papers decades after the commissioners had ceased to meet. These two volumes, [RGO 14/42] and [RGO 14/43] are arranged in chronological order, with the first kept letters arriving in 1782. There was a spike in interest in electricity and magnetism in this period and the Board also started to retain its correspondence at this point, resulting in a large quantity of letters on this subject being present in the archive. Within these volumes there is correspondence from John Chapman, John Ross, Peter Barlow and Edward Sabine amongst much that Thomas Young and the Commissioners simply disregarded as fanciful schemes and impracticable ideas.

Finally in the associated papers we find George Fisher’s investigation into the use of glass springs and balances in chronometers in an attempt to eliminate the effect of magnetism on component parts, and therefore the rates, of timekeepers. Fisher’s observations and designs were discussed in an article by him in the Nautical Magazine in 1833 but the work behind that article is contained in various notebooks. [FIS/20] contains work on chronometers in Greenwich and Hartwell whilst [FIS/5] contains extensive work with dipping needles and magnetic electrical induction when Fisher was at Dane’s Island, near Spitsbergen, with Captain David Buchan in the summer of 1818.

Magnetic variation is a useful example of the tenacity of certain schemes for finding longitude in both the public and scientific imagination, despite its relative insignificance to the Board. The revolution which the compass had wrought in navigation, made it easy to think that this simple but marvellous instrument might yet have additional uses and that the phenomenon of the earth’s magnetism was also the key to other aspects of navigation.