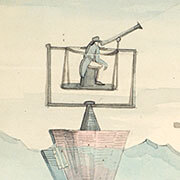 Marine chairs were inventions that were intended to improve astronomical observing at sea by providing an observer on a rocking ship with a stable viewing platform as they used an instrument such as a telescope, sextant, quadrant, or earlier an astrolabe. The designs suggested over the centuries varied widely. They often involved different forms of gimbals or suspended weights, and could either be put on the deck of a ship or sometimes floated in the water near a ship. At least in the later centuries, these 'chairs' were often specifically intended to improve observations employed in estimating the ship's longitude coordinate - such as observations of lunar-distances or of the moons of Jupiter.

The concept goes back to at least the sixteenth century in Europe, when seafaring nations such as Portugal produced a number of navigational innovations. For example, there is a magnificent woodcut illustration in Le cosmolabe by Jacques Besson, published at Paris in 1587, of a gimballed marine chair. It is on the poop deck of the depicted ship and features a chair inside of an openwork globe mounted on perpendicular axes, so that in theory the chair's inertia would keep it stable. At the time, this was unlikely to work in practice.

Marine chairs, despite often having been ignored by modern scholars in favor of the chronometer and lunar-distance approaches to estimating longitude, reappeared throughout the history of the British Commissioners of the Longitude. Christopher Irwin of Ireland (see his entry) generated a lot of national and international interest in the late 1750s and early 1760s with his design. The Board funded the finishing and sea trial of it, granting him £500 on 17 August 1762 [RGO 14/5:37]. Nevil Maskelyne considered the chair alongside the lunar-distance method and one of John Harrison's longitude timekeepers on his 1763 trip to Barbados. (Maskelyne, who in 1765 would become Astronomer Royal and a Commissioner of Longitude, reported that the invention was useless. A draft of the letter he sent from Barbados to the Board conveying this and other news is in RGO 4/320:7 [RGO 4/320:7].)

Even into the early nineteenth century, projectors continued to periodically suggest their own designs, just as other Europeans continued to pursue the idea. This can be seen in the Board minutes and in some of the volumes of correspondence. Examples include the chair designed and tested by Sir Joseph Senhouse [RGO 14/30:470] in 1793-1794, that of Lieutenant William Chevasse depicted in 1813 in a description and lovely watercolour [RGO 14/36:51], Dickinson's marine chair of 1815 in RGO 14/11 [RGO 14/11:120], that of the Scottish minister and inventor Henry Liston [RGO 14/36:77] in 1818, and beginning in 1820 the Naval midshipman Peter Lecount who asked [RGO 14/36:91] for money to build his proposed chair in the Naval Dockyard.

Alexi Baker
History and Philosophy of Science
University of Cambridge