…The Trust’s greatest asset is its library, a unique, independent resource for research…" 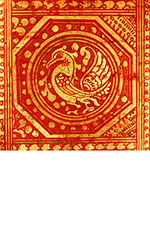 Established in 1978 by the Indologist Sir Harold Bailey, archaeologists Raymond and Bridget Allchin, art historian Joan van Lohuizen and her husband, historian Jan van Lohuizen, the Ancient India and Iran Trust occupies a unique position as an independent charity concerned with the study of early South Asia, Iran and Central Asia, promoting both scholarly research and popular interest in the area.

The Trust’s greatest asset is its library: with over 50,000 items, it is a unique, independent resource for research in the fields of the cultural heritage of ancient South, South East and Central Asia, Iran and the history of the Indo-Iranian languages.

The library at AIIT also houses photographic collections, including images from the collections of Raymond and Bridget Allchin, Joan van Lohuizen, Penelope (Chetwode) Betjeman, James Harle, Charles Bawden and Howard Wilson, and the private papers and archives of several trustees and donors. In addition, there is a small collection of Oriental manuscripts, most of which were collected by Sir Harold Bailey in the late 1930s and 40s, comprising mainly Persian manuscripts but also Armenian, Arabic and a small number of Sanskrit, Tibetan, Mongolian, Manchu, Malay, Burmese, Pashto, Turkish and Urdu manuscripts.

With a view to increasing access and for preservation purposes, the Trust has begun digitising a selection of these specialist collections. Among the first to be made available on CUDL will be a comprehensive photographic archive of the collections of Kabul Museum, taken by Dr Bridget Allchin in 1951, and the coin collection of Professor Harold Bailey, featuring over 100 predominantly Parthian and Sassanian coins.