The agrarian reform is not a favour, it is an act of justice. As such it not appreciated. It is accepted with the dignity with which what is just is accepted." 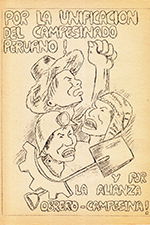 ‘La voz del campesino’ (The Peasant’s Voice) was a weekly bulletin produced by members of the rural community of Huaura in the department of Lima, Peru in the 1970s. The bulletin was published at the height of one of the most radical and extensive land reform programmes in Latin America, the 1969 Agrarian Reform Law introduced by the military government of Juan Velasco Alvarado (1968-75). Designed to address deep social inequalities and underdevelopment, the reform expropriated land from large estates and redistributed it to agricultural cooperatives, peasant communities and landless peasants. In response to the news of the reform, peasants across Peru established agrarian reform defence committees to show their support for the reform and prevent local evasion by large landowners. ‘La voz del campesino’ was the mouthpiece of one such defence committee in the valley of Huaura-Sayán, 148km north of Lima.

Containing 84 issues from March 1972 until December 1974, this collection is an invaluable historical source that provides insights on local experiences of land reform and peasant-led efforts to mobilise politically. Each bulletin is on average eight pages long and contains a mixture of local news (peasant meetings, strikes, progress of the cooperatives, confrontations with government agencies) and national news (such as the marches against the Marcona Mining Company and the Cerro de Pasco Corporation), as well as references to international affairs (homages to Che Guevara, commentary on French nuclear power and the Vietnam War). The agrarian reform defence committee that produced the bulletin was dissolved in August 1972 and replaced by the Federación Campesina del Valle Huaura-Sayán (Peasant Federation of the Huaura-Sayán Valley). A key issue that recurs throughout the bulletins is the federation’s struggle to gain official recognition from the Peruvian state and resist the creation of a state-led Agrarian League, which was seen as an attempt to marginalise peasant-led political initiatives and retain authoritarian control of the agrarian reform. The bulletin also charts the community’s efforts to prevent the former agriculture minister José Benavides from evading the expropriation of his own estate.

The bulletin also holds interest for historians of communication and grassroots publishing. It was printed using a mimeograph machine, a print technology that was cheap, light and easy to use. Although it existed since the end of the nineteenth century, the mimeograph became hugely popular in the second half of the twentieth century in the context of a global trend towards self-publishing and the production of small magazines by artists, writers, political activists and counter-cultural movements. Although historians of the Mimeograph Revolution have tended to focus on the alternative poetry scenes of New York and San Francisco in the 1960s, there remains important work to be done on the role that mimeographed publications played in a wide range of cultural and political movements across the world between the 1950s and 1980s.

The physical contents of this collection have been carefully conserved by María Consuelo Gómez, a Catholic nun who was involved in literacy training and social activism among Huaura’s peasants in the 1970s. The authors of the bulletin include Walter Maldonado Quispe (current holder of the physical collection), Calixto Elías Valverde, Víctor Huamán, Andrés Bassinet, Juan María Barbetlot and Monsignor Léon Lorenzo Alvarado. The collection was digitised and catalogued by local historian Luis Alberto Rosado Loarte (in his spare time and without financial or technical support) with the aim of making it accessible to as wide an audience as possible.