A single written character is worth a thousand pieces of gold. 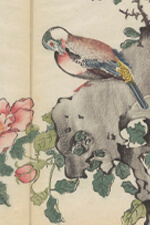 Cambridge University Library acquired its first Chinese book in 1632 as part of the collection of the Duke of Buckingham, but the first substantial holdings of Chinese books came with the donation of 4,304 volumes by Sir Thomas Wade (1818-1895), first Professor of Chinese in the University from 1888 until his death. The Wade Collection, assembled during forty years' residence in China, including ten years as British Minister at Peking, is particularly strong in the areas of history, law and diplomacy, but also contains several rare and unique items, notably materials relating to the mid-19th century Taiping Rebellion, some of which are shown here.

Significant additions to the Library's Chinese holdings came in the years immediately following the Second World War. They included books formerly belonging to, among others, Sir James Haldane Stewart Lockhart (1858-1937), Ernest Alabaster (1872-1950), Arthur Christopher Moule (1873-1957), Professor of Chinese 1933-38, and Gustav Haloun (1898-1951), Professor of Chinese from 1938 until his death.

An important bequest was received in 1952 by the will of Lionel Charles Hopkins (1854-1952), comprising his celebrated collection of over 800 Chinese inscribed oracle bones, more than three thousand years old and by far the oldest documents in the Library.

In 1949 Professor Haloun travelled to China and purchased over 10,000 volumes with a grant from the British Government. Important gifts were obtained from China through the mediation of Dr. Joseph Needham (1900-95). Professors Haloun and Piet van der Loon (1920-2002) drew up the special classification scheme for Chinese books used in the Library, and systematic purchasing of new publications from mainland China (whenever possible), Hong Kong and Taiwan continued under their guidance.

The Chinese collections now comprise about half a million individual titles, including monographs, reprinted materials such as manuscripts from Dunhuang, Huizhou, etc., archival documents and epigraphical rubbings, 200,000 Chinese e-books (donated by Premier Wan Jiabao in 2009), 5,000 Chinese e-serials and 3,500 Chinese microfilm reels. Over 400,000 titles are included in some 2,000 cong shu. About 3,000 Chinese printed serial titles are held in Cambridge libraries.

The items displayed here show the temporal range, diversity of media and variety of subject-matter contained within the Chinese collections, from the oracle bones (the oldest documents in the Library), to unique manuscripts and printed books, historical documents and epigraphical rubbings.