All scripture is given by inspiration of God, and is profitable for doctrine, for reproof, for correction, for instruction in righteousness 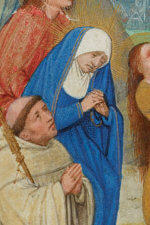 From the earliest years of the Christian Church, the concept of ‘Christ the Word of God made flesh’ inevitably found a parallel in the written word of the Gospels and the teaching of the Apostles. These Greek texts recounting the Life and teachings of Jesus (the New Testament) supplemented the existing Hebrew Scriptures (the Old Testament). Our oldest and most significant manuscript book, the Codex Bezae (late 4th or early 5th century CE), reflects this consuming interest. A bilingual New Testament, with a Greek text and a Latin translation on facing pages, it provides a valuable insight into the reception of the Gospels and Acts in the western Christian tradition.

Biblical manuscripts of all kinds were constantly acquired by the University Library from its early years, whether complete or largely complete texts of the Scriptures, or smaller compilations such as Gospel books for private or liturgical use, exemplified by the Book of Deer, a Scottish pocket Gospel book generally dated to the first half of the tenth century. This emphasis on the texts of the scriptures reflects Cambridge's historic position as a centre of Christian scholarship.

Alongside these biblical manuscripts developed liturgical texts, containing increasingly elaborate orders to direct the services of the Church. The Library’s collections, built up largely from works rescued by interested scholars and benefactors during the religious upheavals of the sixteenth century, show the rich variety of forms of liturgy throughout the Middle Ages both in this country and elsewhere in Europe. Some are magnificently decorated, others more utilitarian. The benedictional of Robert de Clercq, Abbot of Ter Duinen in Northern Flanders between 1519 and 1557, is a personally commissioned book of services and ceremonies specifically to be performed by a Cistercian abbot, and was illuminated by the Flemish artist Simon Bening.

Lay people and clergy alike also acquired books for private use, of which the most famous are Psalters and Books of Hours, often finely embellished, and varying in the details of their content according to their place of origin. They reflected the personal wealth as well as the piety of their owners, while Royalty commissioned sumptuous books for private reading from the best court artists of the day, here exemplified in the unique Life of St Edward the Confessor (c. 1250–60) which opens a window onto court life two centuries after the saint’s death.

Throughout the Christian period scholars and clergy have written works of theology and commentaries in which they explored and debated the Church’s doctrines and the Scriptures. In doing so they have touched on other areas such as philosophy and history, and they continue to do so today.

In this selection we present some of our finest Christian manuscripts and early printed books, spanning over 1000 years of worship and debate and reflecting both Church ceremonial and private devotion.

Under the leadership of Dr Leonard Polonsky and as part of its International Digitisation Project, The Polonsky Foundation has provided major funding towards the development of the digital library's infrastructure and digitisation of Christian Works.