When I awoke next morning, the bedroom seemed puzzlingly bright...The quarters chimed, first from a distance away, then from Great St. Mary’s, then from the college clock, then from a college close by. The last whirr and clang were not long over when, soft-footedly, Bidwell came in. The blind flew up, the room was all a-glare; Bidwell studied his own watch, peered at the college clock, uttered his sacramental phrase: ‘That’s nine o’clock, sir."
— C. P. Snow, The Masters (London, 1951), p. 11 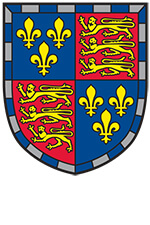 Christ's College was first established as God's House in 1437 by William Byngham, a London parish priest. Shortly after receiving its Royal Licence from Henry VI in 1446, God's House was forced to move from its original site to make way for the King's new project (what was to become King's College). God's House moved to its present site in 1448.

After the death of her third husband and the accession of her son as King Henry VII, Lady Margaret Beaufort turned her energies to good causes, among which was God's House. This led to its re-foundation as Christ's College in 1505.

Following the twists and turns of the Reformation, Christ's became one of the leading Puritan colleges of Elizabethan Cambridge. In 1625 it admitted the young John Milton, who would become a leading Puritan apologist of the Civil War and one of the greats of English literature. His Paradise Lost was first published in 1667. Christ’s holds several first editions of this work, plus a large amount of Milton’s other literary and political writings.

Another of our famous alumni, Charles Darwin, came up in 1828 and lived in rooms in First Court that have subsequently been restored to resemble how they would have looked during his time in College. While his world-renowned On the Origin of Species was published some thirty years later in 1859, the young Darwin's interest in botany and geology was nurtured at Cambridge. Christ’s holds a large number of books by Darwin, along with a collection of his letters.

Like the rest of Cambridge, life at Christ's was transformed by the Victorians, with more rigorous exams, the rise of experimental science, and the opening of the University to non-Anglicans.  In 1897 the College’s original Old Library, dating back to 1505, was increased by an extension constructed to accommodate several significant collections donated in the  nineteenth century by Peter Fraser (in 1852), Charles Lesingham Smith (1878) and William Robertson Smith (1894). We also hold significant collections of manuscripts (including some 60 Persian manuscripts, donated in 1861) and incunabula. The College of the 1930s is evoked (and caricatured) in the celebrated novel The Masters (1951) by scientist, author and Christ’s Fellow C.P. Snow (1905-80).

Those wishing to know more about Christ’s are recommended to consult the quincentenary history edited by David Reynolds, Christ's: A Cambridge College over Five Centuries (Macmillan, 2004). This accessible history includes contributions from distinguished Christ's historians such as Simon Schama, Roy Porter, and David Cannadine.