I do not think that there is any ancient manuscript, of which the text has yet been published, which exhibits more important readings" 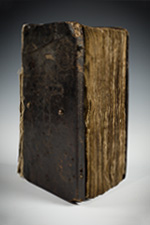 Codex Zacynthius is a palimpsest. The older level is an eighth-century copy of St Luke’s Gospel (only parts of the first eleven chapters survive) with a marginal commentary. This was erased at the end of the twelfth century and replaced with a lectionary of the New Testament, also in Greek. This later text may have been written in Rhodes.

Codex Zacynthius is an important document because

• this commentary is a compilation of extracts from early Christian writings, most of which have not survived at all, or are only known in translations

• it provides important evidence about the development of Greek scripts, since it was written with three different scripts, and dates to a period (probably the eighth century) from which few manuscripts survive

• its text of St Luke is closely related to some of the most reliable and ancient copies to survive, such as the fourth-century Codex Sinaiticus and Codex Vaticanus

• it contains a division of the text into paragraphs that is found in only one other manuscript: the fourth-century Codex Vaticanus

The manuscript was on the Island of Zante in the early nineteenth century, when it was given in 1820 by a leading noble to General Colin Macaulay, who the following year presented it to the British and Foreign Bible Society. It was bought from the Society by Cambridge University Library in 2014.

In addition to the navigation within this interface, users may find it useful to explore the list of catena contents and the list of lectionary contents, as well as the concordance of the overtext and undertext pages, hosted by the University of Birmingham.

This edition, comprising images, transcription and translation was prepared by the Codex Zacynthius Project at the Institute for Textual Scholarship and Electronic Editing (ITSEE), University of Birmingham. This project was funded by the UK Arts and Humanities Research Council (AHRC) from 2018–20. The project has also produced a book describing the manuscript and its commentary.

Funded by the Arts and Humanities Research Council