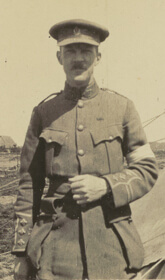 (Harold Arthur) Thomas Fairbank was born on 28 March 1876, the eldest son of Thomas Fairbank MD, a practitioner at Windsor and Mary Louisa Nicholson. He was educated at Epsom College from which he gained an open scholarship to Charing Cross Hospital. He qualified in 1898 as a doctor and in 1899 as a dentist but, after a house surgeon's appointment at Charing Cross, he volunteered to serve as a surgeon in the South African War.

On his return to England in October 1900 and after achieving his higher surgical qualifications he was appointed resident superintendent at Great Ormond Street Hospital, and became surgical registrar. He was then appointed orthopaedic surgeon to Charing Cross, the first appointment of its kind in London, and also to Great Ormond Street, where his particular study was of congenital dislocation of the hip. In 1914 he visited orthopaedic centres in New York and Boston but, as the holder of a commission in the Royal Army Medical Corps, he was mobilised with the 85th Field Ambulance and proceeded to Belgium and France, mostly in the vicinity of Ypres. Later his unit was moved to Macedonia to serve in Struma valley, and he was appointed consulting surgeon to the British Salonika Force, being awarded the DSO and OBE, and being three times mentioned in dispatches.

The diaries and photographs digitised here give a vivid impression of the life of an army surgeon during the First World War, first on the Western Front, including the Second Battle of Ypres and the Battle of Loos, and later in Salonika.