I embrace the religion of love wherever its caravans head" 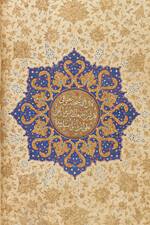 Cambridge University Library's collection of Islamic manuscripts dates from the origins of Arabic scholarship in Cambridge in the 1630s when the University founded a Professorship in Arabic and William Bedwell donated a Qurʼān to the Library. Since that time the collection has grown in size and diversity to over 5,000 works, including the collections of Thomas Erpenius, J.L.Burckhardt, E.H.Palmer and E.G. Browne. These manuscripts shed light on many aspects of the Islamic world, its beliefs and learning.

The collection was further enriched over the centuries through the activities of scholarly collectors and skilled librarians, adding more depth to the already impressive range of manuscripts. Yet this extraordinary collection has remained relatively unknown outside Cambridge. Now we hope to draw better attention to its treasures through cataloguing and digitisation. We have collaborated with the Bodleian at Oxford and other research libraries to provide an online catalogue of the collection. We will be offering a selection of digitised manuscripts through the Foundations project and will seek funding for further digitisation.

In this selection, we present the full collection of our earliest Qurʼānic manuscripts copied during the first four Centuries of Islam. With a grant awarded by The Islamic Manuscript Association in 2012 we were able to enrich the content description of each fragment. The style of writing commonly known as “Kufic” has been classified into distinct palaeographic styles. The Suras are clearly indicated and searchable by name and numbering, which will guide the reader through the text. Amongst this collection is a portion of the earliest Qur`an for which an evident terminus ante quem exists. This Qurʼān was made an endowment (waqf) by Amajur the Governor of Damascus in 876 AD/ 262 AH.

From the wider collection of Islamic manuscripts we have included a complete and beautifully illustrated Qur'an and a number of very early fragments dating back to the first centuries of the Islamic calendar. From the rich literature encompassing the Islamic tradition we have chosen the only extant copy of Kitāb al-tawḥīd, the famous theological work by by al-Maturidi, alongside works on science and some richly illustrated examples of Persian Literature.

Several items from this collection featured on BBC Radio 4's 'In Our Time - The Written World', broadcast in January 2012

Under the leadership of Dr Leonard Polonsky and as part of its International Digitisation Project, The Polonsky Foundation has provided major funding towards the development of the digital library's infrastructure and the digitisation of the Islamic manuscripts.

Content descriptions for the early Qur`anic fragments have been funded by the The Islamic Manuscript Association.