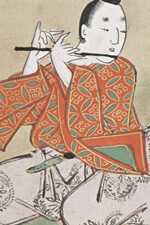 Japan possesses an exceptionally rich heritage of written culture founded in its long literary tradition and history of paper production and in its connections with the civilizations of neighbouring China and Korea, including the traditions of both Buddhism and Confucianism. The Aston, Satow and Von Siebold Collections at Cambridge University Library are among the most important collections of early Japanese books outside Japan. William George Aston (1841-1911), Ernest Mason Satow (1843-1929) and Heinrich von Siebold (1852-1908) were great pioneers of Japanese studies. Both Aston and Satow served as British diplomatic staff in Japan, while Heinrich von Siebold, the second son of Philipp Franz von Siebold, worked as an antiquarian, collector and translator.

These pioneer Japanologists traveled to Japan in the 1860s and found there an already well-developed and rich print culture. Traditional Japanese books were abundant and relatively cheap when they and other Western scholars first started to collect them. Cambridge University Library received most of its early Japanese books, over 2,500 items, in 1911-1913. In 1911, 721 Japanese books were presented from Von Siebold's collection, and later that same year, a large amount of Aston's Japanese books were acquired by the library, including Satow's books, for the sum of £250. Satow himself presented 371 volumes in 1912 and another 62 volumes in 1913.

A generous donation by Professor Mikiko Ishii allowed the digitization of a first group of materials from our early Japanese collections for the Cambridge Digital Library. A second digitization project is underway in collaboration with the Art Research Center at Ritsumeikan University. Descriptions of Japanese books in the digital library are mainly derived from Hayashi Nozomu and Peter Kornicki: Early Japanese Books in Cambridge University Library: a Catalogue of the Aston, Satow and Von Siebold Collection, a copy of which may be found in the East Asian Reading Room (FD.22.28).

Digitization of Japanese works began with a generous donation by Professor Mikiko Ishii of Kanagawa University, Japan, and continues through the efforts of the Art Research Center at Ritsumeikan University and with the support of Kakenhi from the Japan Society for the Promotion of Science.