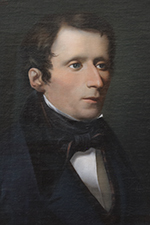 Giacomo Leopardi is one of the best-known Italian authors. He was born in Recanati, a small town in the centre of Italy, in 1798 and died in Naples in 1837, two weeks before his 39th birthday. Since the very beginning of his childhood, he showed huge intellectual abilities, having learned Greek, Hebrew, and other languages alone by reading the so-called Bibbia Polyglotta, the English edition of the Holy Scriptures published in London in the XVII century. He was a philologist and a prose writer, but he is known mostly for his poetry which has been translated into more than twenty languages.

This codex was presented to the University Library by Charles Fairfax Murray in 1917 and was first described by Kathleen T. Butler in 1937. The item gathers 41 manuscripts: 36 letters sent by Giacomo Leopardi to his many correspondents, two small “translation essays” from classical languages also by Giacomo Leopardi, and other three letters, respectively by Monaldo (1) and Paolina (2) Leopardi, to different addressees. Unfortunately, it is difficult to retrace all the “paths” followed by the documents before being bound in the leather cover that guards them now; nevertheless, Murray must have bought them from auction houses, probably on several different occasions. Many documents contain information about Leopardi’s books, while other letters give information about the poet’s health and his activity as a “copy editor” for his friend Giovanni Rosini. Among Giacomo Leopardi’s autographs, it is important to highlight the presence of many letters to Antonio Fortunato Stella, the publisher sited in Milan who printed a great number of Leopardi’s literary works. Also relevant are the two pieces of translation, which testify to Leopardi’s activity as a philologist.

This edition is the result of a project run in collaboration with Cambridge Digital Humanities. All of the 41 documents are accessible online; they are preceded by the description of the codex gathering them. Each autograph is presented with a high-resolution image and a set of metadata giving information about the author, the date of creation, and the letter addressee (when available). In addition, every item is supplied with a diplomatic transcription accessible as an additional option. Finally, every user can download a file containing the whole text of the autographs marked in XML-TEI.

Digitisation sponsored through the Cambridge Digital Humanities seed funding scheme
By continuing to use the site you agree to the use of cookies. You can find out more in our help section.