I William Jones...make my last Will and give to the Earl of Macclesfield my gold watch, as an acknowledgement of the many favours received from him, together with my Study of Books, as they now stand in my Catalogue, with all the acquisition I may hereafter make thereunto" 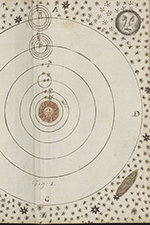 The Macclesfield Collection principally includes the archives of John Collins (1625-1683) and William Jones (1675-1749).  As well as being mathematicians in their own right, both men corresponded with leading scientific figures of their day and so the collection includes autograph material by Isaac Newton, Edmund Halley, Henry Briggs, Roger Cotes, Henry Oldenburg and Robert Hooke.

William Jones was a teacher of mathematics and was tutor to George Parker (c.1697-1764), son of Thomas Parker, the first Earl of Macclesfield (1667-1732). In 1708 Jones acquired Collins’s papers. Following his death in 1749, Jones’s library was left to the second Earl of Macclesfield.

The Macclesfield Collection remained in the library at Shirburn Castle, the ancestral home of Earls of Macclesfield until 1999 when they were bought through Sotheby’s by Cambridge University Library.

The correspondence and papers relating to Sir Isaac Newton were the only section of the Macclesfield Collection to have been seriously studied prior to its arrival in the University Library, but even in this area a number of items have been found which add valuable new evidence to the issues surrounding the composition of Newton’s Principia (e.g. MS Add.9597/2/1-10), to its reception once published (e.g. MS Add.9597/6/16, MS Add.9597/16/10) and to the priority dispute between Newton, Leibniz and their followers (MS Add.9597/2/18/91-93).

The papers not directly deriving from Newton had been virtually inaccessible before they came to the University Library, and here too there have been some significant discoveries. MS Add.9597/5/22 has been identified as part of a lost manuscript written in the hand of (and possibly authored by) William Jones called ‘An English Treatise of Common Arithmetic’. The existence of this treatise was hitherto only known from a mention in John Ward’s The Lives of the Professors of Gresham College (London, 1740). Jackie Stedall (1950-2014) of Queen’s College, Oxford identified MS Add.9597/5/1 as John Pell’s important manuscript annotated copy of Diophantus’ Arithmetic, which (again) was thought to have been lost. More tentative but equally exciting identifications have been made concerning other items in the collection. Aside from Newton’s papers and correspondence, the collection is arranged by subject and spans: mathematics; navigation (reflecting Jones’ earlier career at sea); geography; finance (Jones started his working life in a counting house); physics; optics; and astronomy (an interest and pastime of the second Earl of Macclesfield); among others. A hitherto neglected aspect of the collection, underlined by the catalogue, is that it represents a unique snapshot of the work of a tutor (William Jones) in the household of a late seventeenth century nobleman: it is very unusual for such a large volume of teacher’ s and pupils’ work to survive in manuscript. The collection also contains a number of paper instruments including this slide rule (MS Add. MS Add.9597/13/5/215).