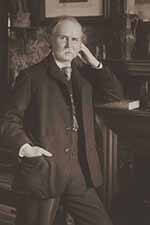 The origins of the present Marshall Library lie in the small Moral Sciences Library created by Professor Alfred Marshall and Professor Henry Sidgwick from 1885 onwards, largely through the donation of their own books for student use. This library was situated in the Divinity School opposite St. John's College. Following the struggle to establish Political Economy as a subject in its own right, the Economics books were transferred to the keeping of the Special Board for Economics and Politics in 1906. In 1909 J.M. Keynes became the first formally appointed Librarian of the collection, thereafter known as the Departmental Library of Economics.

Alfred Marshall died in 1924, leaving many of his books and money to the Library. The two collections were merged and re-named the "Marshall Library of Economics" in his memory. Alfred's widow, Mary Paley Marshall acted as a volunteer librarian for nearly twenty years, until she retired at the age of 87. From 1925 until her death in 1944 she gave £250 annually to the library. In addition, she bequeathed £10,000 to the University "for the development and increased usefulness of the Marshall Library". The final move to the present building in Sidgwick Avenue, which was designed by Sir Hugh Casson, took place in the early sixties.

The Marshall Library now plays a central role in supporting the teaching, learning and research of the Faculty of Economics and sustaining the Faculty's international reputation as a centre of excellence in the subject. It currently has a collection of over 100,000 volumes containing 60,000 books and includes archives and special collections. In order to make our special collections more accessible to researchers we hope to make some of the items available digitally. We are starting with this recent donation of an original proof of the first edition of Alfred Marshall’s Principles of Economics. This item was returned to the collection recently by Emeritus Professor Uemiya (Kobe University, Japan) from Japan where it had been, mysteriously, for most of the twentieth century in the collection of Professor Kanichi Minakata. We hope to add to our digital collections when funding is available.