There is nothing that does not leave its mark 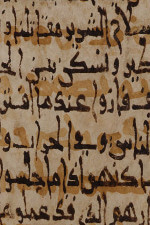 This complex manuscript is a palimpsest containing portions of two ancient Qurʼāns, probably written in the 7th or 8th century CE. The term 'palimpsest' describes a manuscript where the original text (or under-writing) has been erased to create a clear writing surface for a new text (or over-writing). Scholars have used various techniques to try to recover the under-writing of palimpsests, from the aggressive chemical reagents of the nineteenth and early twentieth centuries, to the sophisticated digital imaging techniques in use today.

The manuscript was bought in Sinai in 1895 by the famous collector and scholar Agnes Lewis Smith. The twin sisters Agnes Smith Lewis (1843–1926) and Margaret Dunlop Gibson (1843–1920) travelled extensively in the area and accumulated a valuable collection of photographs. Their major acquisition consisted of early fragments, known as the Lewis-Gibson Collection. At the time the palimpsest was bought it appeared to be merely a bound selection of Christian Homilies written in Arabic in the 9th or 10th century CE. On closer examination, and after the application of a chemical reagent, Agnes discovered the numerous texts hidden beneath the homilies. With the help of contemporary scholars, she successfully identified portions of the Apocryphal Protevangelium Jacobi and Transitus Mariae (ca. 5th century CE), a paper leaf in Greek from the Book of Genesis, leaves from manuscripts of the Peshitta Gospels (5th century CE), an Arabic document, a Syriac hymn, and several other miscellaneous Syriac and Arabic texts, some of which she successfully transcribed and published in her "Apocrypha Syriaca" in 1902. However, the most illegible portion of the under-text, comprising a third of the codex, remained resistant to interpretation until she had the manuscript disbound. This lead to the groundbreaking discovery of the two ancient Qurʼānic fragments, identified here as the Large and Small Qurʼānic leaves, and to the publication, in collaboration with the scholar Alfons Mingana, of the book "Leaves of an Ancient Qurʼān - possibly pre-Othmanic" in 1914.

Shortly after the publication of the article, the manuscript was sent to Leipzig for the exhibition Internationale Austellung für Buchgewerbe und Graphic. At the outbreak of the First World War, it disappeared, and was considered lost until 1936 when it was brought back to Cambridge. Under the terms of Agnes' will, made just before her death in 1926, the manuscript had been bequeathed to the University Library. Partly because of the controversy surrounding these events, there have been no further studies of the palimpsest until recently.

Since 2008 Alba Fedeli, a scholar of Qurʼānic manuscripts, has engaged in an extensive research project, uncovering the historic context of the Mingana-Lewis Palimpsest and applying new methods in an attempt to create a possible reconstruction of the Qurʼānic under-writing. The palimpsest as presented here is in large part a result of her research.

For the Qurʼānic fragments, three images of each leaf are shown - first the original image as seen under natural light, second, a processed image with the over-writing virtually erased by modifying the black ink to resemble the colour of the parchment, and third, an enhanced image highlighting the visible parts of the under-writing and adding the hypothetical missing details covered by the over-writing. This third image has an accompanying transcription of the under-writing, available under the "View more options" tab. A key to the conventions used in the transcription can be found here. For more information on the manuscript and its history, and the methodology used in the project, see this post on the Library's Special Collections blog.

The Arts and Humanities Research Council supported this research project based in the Institute of Textual Scholarship and Electronic Editing, University of Birmingham
By continuing to use the site you agree to the use of cookies. You can find out more in our help section.