At home I betake me somwhat the oftner to my Librarie, whence all at once I command and survay all my houshold … There is my seate, that is my throne." 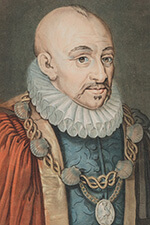 The Montaigne Library of Gilbert de Botton is a remarkable collection of books connected with the life and times of Michel de Montaigne (1533–1592), including ten volumes from Montaigne’s personal library. It was assembled by the Montaigne scholar and financier Gilbert de Botton (1935–2000) and came to Cambridge University Library in 2008. Montaigne’s Essais were first printed in Bordeaux in 1580 and revised throughout the author’s lifetime. More properly understood as ‘trials’ or ‘attempts’ than essays in the modern sense, they cover an extraordinary range of subjects. De Botton first read them in his mother’s Pléiade edition: ‘A most unstuffy great … who would draw me in deeply, as he has countless unwavering admirers since 1580’.*

The motivation behind Gilbert de Botton’s collection was a desire to recreate Montaigne’s library—either by buying Montaigne’s personal copies, where available, or other copies of works known to have belonged to or been read by him. The ten personal copies in the Library make this the third largest collection of Montaigne’s books after those of the Bibliothèque nationale de France and the Bibliothèque municipale, Bordeaux. They include Montaigne’s copy of Lucretius’ De rerum natura (1563), a text heavy with Montaigne’s annotations and the date when he finished reading it, 16 October 1564, at the age of thirty-one. It allows us a remarkable insight into the way that Montaigne read and understood Lucretius, a noted influence on his work. The other nine volumes are editions of Terence (1541), Strabo (1549), and Appian (1551), the works of Sophocles (1553), Aimoin de Fleury's Historiæ Francorum (1567), Joannes Baptista Egnatius's De exemplis illustrium virorum Venetæ ciuitatis (1554), the Fatti memorabili d’alcuni papi of Girolamo Garimberto (1506–1 575), the works of the neo-Latin poet Marco Girolamo Vida (1541), and Joachim Du Bellay's Les regrets (1565), although the authenticity of the signature on the Du Bellay has been the subject of some debate.

The Montaigne Library at Cambridge also has a fine set of early printed editions of Montaigne’s works, including a copy of the first edition of 1580 owned by Ben Jonson, as well as modern editions and criticism, making this an outstanding resource for scholars of Montaigne. This selection for the Cambridge Digital Library has been made possible thanks to a generous gift from Dame Janet de Botton, and includes all ten books formerly owned by Montaigne, as well as other copies of works known to have influenced his writings—a rich collection of sixteenth-century books reflecting the contents of Montaigne’ s own library in the circular room on the third floor of the tower at his château in Bordeaux. It also features early editions of Montaigne’s Essais, including the abridged Italian translation of 1590, as well as Montaigne’s translation of La theologie naturelle de Raymond Sebond (1569) and two documents associated with the Montaigne family.

*Foreword, in M. A. Screech, Montaigne’s annotated copy of Lucretius: a transcription and study of the manuscript, notes and pen-marks (Geneva, 1998), p. xvi.

Colour aquatint portrait of Montaigne by Pierre-Michel Alix (1792). From the Montaigne Library.

The French printmaker Pierre-Michel Alix was well known for his colour aquatint portraits of famous figures of the French Revolution and Napoleonic era. This portrait was printed by Béchet for the Collection des grands hommes. The prints were sold for six francs each and could be had from ‘Drouhin, Editeur & propriétaire des Antiquités Nationales, Rue Christine No. 2’ in Paris. The Montaigne portrait is after one by Etienne Ficquet of 1772, itself modelled on a seventeenth-century painting in the Musée Condé, Chantilly, sometimes attributed (as here) to a member of the Dumonstier family.