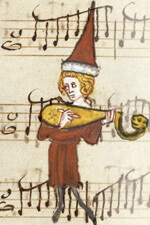 Within the printed music collections a large section is devoted to music published in the British Isles, much of which has been received under the provisions of the various Copyright Acts since 1709. As a result the library holds, for example, an amazing collection of Victorian songs. Named special collections provide additional collections strengths such as 18th-century music treatises in the Arnold Bequest, the Kikutei scrolls in the Picken Collection, and historical performance sets in the CUMS orchestral library, to name just a few. The archival collections focus primarily, but by no means exclusively, on British 20th-century music. Composer archives such as the Arthur Bliss, William Alwyn, Doreen Carwithen, Roberto Gerhard and Peter Tranchell Archives typically contain archival material as well as music manuscripts. The music collections also include autograph music by James Hook, Alan Gray, C.B. Rootham, Peter Warlock and many other composers.