History of the New Museums

William Napier Shaw, on the Museums and Lecture Rooms Syndicate

These two volumes tell the story of a crucial phase in the history of Cambridge science, from the point of view of a particular place: the ‘New Museums Site’ in the centre of town. The prehistory, development and work at the site are covered in an archive assembled by its first administrator, John Willis Clark.

When the New Museums Site was first planned, soon after the introduction of the Natural Sciences Tripos in 1849, it provoked great controversy within the University, and only after a decade of wrangling were the first buildings completed. These were the original 'new museums', populated by ever-growing botanical, mineralogical and zoological collections. By the 1870s, however, the balance had tipped in favour of experimental research over taxonomic study, and the New Museums Site gradually began accommodate laboratories alongside – and sometimes within – the original buildings.

John Willis Clark was the administrator who oversaw these dramatic developments. He was a classicist, theatre enthusiast, architectural historian and museum curator. He was also secretary to the Museums and Lecture Rooms Syndicate – an organisation whose dull name conceals a crucial role in the history of science. When he left the Syndicate, Clark collected together all of the material relevant to the history of the New Museums Site. This includes published Syndicate documents,* but goes far beyond the official record. In his position as secretary, Clark was able to collect and organize a uniquely revealing resource, detailing everything from high-level University politics to the organisation of display cases and the maintainence of the guttering system.

By the end of the nineteenth century it was evident that new space was needed, first across the road in the Downing Site, and eventually further afield, in the developments at West Cambridge, the Science Park and Addenbrookes that characterize Cambridge science today.

* The official papers of the Museums and Lecture Rooms Syndicate are to be found in the University Archives, Min.VI.13, Min.VI.65-7, and Min.VI.72. 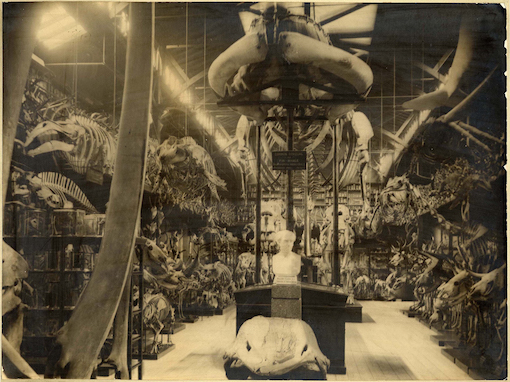 Interior photograph of the Museum of Comparative Anatomy and Zoology, circa 1900. Note the ‘ Pevensey Whale’ (Fin Whale) at the top of the picture. The whale is still on display in the contemporary University Museum of Zoology. Image courtesy of the Museum of Zoology Archives.
The digitization of this archive was generously supported by the Isaac Newton Trust (grant number RG81914) and the Leverhulme Trust (grant number RG79693), as part of the research project 'The Lost Museums of Cambridge Science, 1865–1936'.