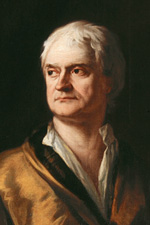 Cambridge University Library holds the largest and most important collection of the scientific works of Isaac Newton (1642-1727). They range from his early papers and College notebooks through to the ground-breaking Waste Book and his own annotated copy of the first edition of the Principia. These manuscripts along with those held at Trinity College Cambridge, King’s College Cambridge, the Fitzwilliam Museum, the Royal Society and the National Library of Israel have been added to the Unesco Memory of the World Register. As well as University Library material, our collection includes two important items from The Royal Society's collections - a manuscript copy of the Principia and a collection of Newton's correspondence.

Newton was closely associated with Cambridge. He came to the University as a student in 1661, graduating in 1665, and from 1669 to 1701 he held the Lucasian Chair of Mathematics. Under the regulations for this Chair, Newton was required to deposit copies of his lectures in the University Library. These, and some correspondence relating to the University, were assigned the classmarks Dd.4.18, Dd.9.46, Dd.9.67, Dd.9.68, and Mm.6.50.

In 1699 Newton was appointed Master of the Mint, and in 1703 he was elected President of the Royal Society, a post he occupied until his death.

After his death, the manuscripts in Newton's possession passed to his niece Catherine and her husband John Conduitt. In 1740 the Conduitts' daughter, also Catherine, married John Wallop, who became Viscount Lymington when his father was created first Earl of Portsmouth. Their son became the second earl and the manuscripts were passed down succeeding generations of the family.

In 1872 the fifth earl passed all the Newton manuscripts he had to the University of Cambridge, where they were assessed and a detailed catalogue made. Based on this catalogue, the earl generously presented all the mathematical and scientific manuscripts to the University, and it is these that form the Library's 'Portsmouth collection' (MSS Add. 3958-Add. 4007).

The remainder of the Newton papers, many concerned with alchemy, theology and chronology, were returned to Lord Portsmouth. They were sold at auction at Sotheby's in London in 1936 and purchased by other libraries and individuals.

In 2000 Cambridge University Library acquired a very important collection of scientific manuscripts from the Earl of Macclesfield, which included a significant number of Isaac Newton's letters and other papers.

A number of videos explaining aspects of Newton's work and manuscripts are available from the Newton Project's YouTube site, a selection of which are presented alongside our manuscripts.

The Trinity College Notebook featured on BBC Radio 4's 'In Our Time - The Written World', broadcast in January 2012.

Under the leadership of Dr Leonard Polonsky and as part of its International Digitisation Project, The Polonsky Foundation has provided major funding towards the development of the digital library's infrastructure and the digitisation of the Newton Papers.

JISC (Joint Information Systems Committee) awarded a grant to Cambridge University Library and the Newton Project at the University of Sussex for the Windows on Genius project ( JISC e-Content Programme 2011). This project has enabled the linking of Newton's facsimiles and transcriptions.

Sir James Thornhill's Portrait of Isaac Newton reproduced with the kind permission of the Master and Fellows, Trinity College, Cambridge.
By continuing to use the site you agree to the use of cookies. You can find out more in our help section.