for the extirpation of heresies and errors, the augmentation of the faith, the advantage of the clergy and stability of the church" 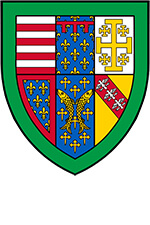 ‘The Quenes collage of sainte Margarete and saint Bernard’ was founded in 1448 by Queen Margaret of Anjou, wife of King Henry VI. This followed extensive preparatory work undertaken by Andrew Dockett, Rector of St Botolph’s, who having previously obtained foundation charters for the college from Henry VI in 1446 and 1447 (that were subsequently rescinded), became the college’s first president when it was finally established in 1448.

With the overthrow of Henry VI by Edward IV in 1461 Dockett secured the patronage of Elizabeth Woodville, Edward’s wife, who gave the College its first statutes as ‘true foundress’ in 1475. Her stated aim was to promote the safety of souls and the public good and assist needy scholars. In addition to providing for a president and twelve fellows, the college statutes of 1475 included provision for administration of the library, which was placed in the care of two college Bursars.

The library had existed as an integral component of college life since the college was built in 1448-9, and it is therefore Cambridge’s oldest purpose-built library. Still situated in its original room, the bookcases incorporate the medieval lecterns to which the original collection (as inventoried in 1472) was chained. Although none of that original collection of 199 manuscript volumes remains, the library holds a fine and hugely significant collection of c. 30,000 early printed books and manuscripts dating from the twelfth to nineteenth centuries. Many of the books have been annotated by past readers, thereby providing an invaluable record of intellectual activity from early modern times until the nineteenth century.

The collection covers the whole range of subjects studied by Queens’ members during that period including theology, classics, history, philosophy, astronomy, medicine and English literature. During its existence, the library has benefited from a number of major benefactions including those of Sir Thomas Smith, Tudor humanist and statesman (1577), the mathematician Isaac Milner (1820) and John Smith, the Cambridge Platonist (1652). There is also an extensive collection of early Erasmus editions.

Digitisation of volumes from Queens’ Old Library has been made possible with generous assistance from the Heritage Lottery Fund and William Heard. Further items will be digitised and made available via the Cambridge Digital Library as funding becomes available.