We are very glad to have our attention drawn to this valuable collection of drawings, so long out of sight and mind. Those who have of late years taken it upon themselves to describe those of the antiquities of the county as they existed well nigh a century ago, ... have omitted much that is of extreme interest through not having consulted this treasury of local art and archaeology."

Editor of The East Anglian (1909), following a short piece by Montagu Benton, who was the first to compile a list of Relhan’s drawings 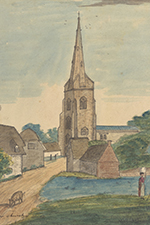 Richard Relhan’s topographical drawings, with a date range of 1797-1838, are an expressive record of buildings and the countryside in a period immediately preceding immense change. They are generally accurate in detail and atmosphere and are therefore invaluable for the modern historian, and they also have an appealing charm. Relhan was a humble man in all respects, unknown as an artist, struggling to pay bills, sharing crowded accommodation with siblings and never marrying, but a supportive member of a large family and dedicated to his private hobby. He lived in central Cambridge, amongst colleges but not part of their world, with skilled and educated trades people such as Harraden and Son around the corner while he lived above his apothecary shop in St John’s Street, and would walk or share a carrier’s cart into the countryside for his art. He must also have been part of a circle of antiquarians of all classes in Cambridge that was enthusiastic to study all things old and which enjoyed the creation of institutions we still have today, e.g. the Fitzwilliam Museum, Monumental Brass Society, Ecclesiological Society and Cambridge Antiquarian Society. Happily, Relhan was just in time to record churches before drastic Victorian restoration began, historic houses that were soon to be demolished or radically improved, and views of the rural landscape, where open fields were soon to be enclosed. It was a fast changing world that he captured.

His choice of sites covers much of southern Cambridgeshire. Outlying sites were not visited but relied on adapting Lysons and other sources, so Whittlesey and Stretham for example have the wrong backgrounds added. Elsewhere longer journeys were evidently possible by sharing a carrier’s cart, for we think he was sometimes accompanying his ageing botanist father on his plant hunting forays, and this is perhaps the elderly blue-coated gentleman who appears in several drawings. A suitable cart is shown at Bartlow and Haslingfield. A few sites, notably Haslingfield, were recorded so frequently we must assume there were friends or clients able to give hospitality, but walking long distances was normal at this time and most of the villages would easily be in his range. There are surprisingly few Relhan scenes of Cambridge, considering he was living over the road from major colleges, for even the drawings of St John’s and King’s Colleges could have been adapted from other sources. However, he had access into several colleges to record their heraldry, memorials and items such as Henry VII’s cloth of gold hearse cloth (90). Most of the Castle drawings are from other sources, perhaps collected by Edward Ventris, the keen antiquarian vicar of Quy who was also Chaplain at the Castle. Only the informative view of the Castle drawn 1800 (74) is definitely Relhan’s. One constraint was that Relhan as a tradesman (apothecary) was unlikely to be welcomed in the houses of gentry, let alone aristocracy, as John Layer (1586-1640) and William Cole (1714-1782) were, for they were both clergymen with independent means. Cole in particular had his own comfortable transport, was lavishly wined and dined in country houses and could offer good company and erudite conversation. His work in Cambridgeshire, now in the British Library and as a microfiche in Cambridgeshire Archives, is a valuable resource which needs to be more widely accessible. The only houses Relhan recorded indoor scenes were Haslingfield and Childerley, both without resident owners, rapidly declining and partially demolished.

Benton in 1909 wrote that the ‘heraldic work of the monuments, hatchments, etc is especially fine; the architectural drawing is mediocre’. Certainly he was weak on scale and perspective but when comparing images, eg for church details, he appears remarkably reliable (this is discussed for individual sites in the Texts). Table tombs and gravestones for example can often be matched today, as can background buildings. People and animals might be added to give the right atmosphere but cannot be taken literally (the same figures occur quite often in different places, even places we know Relhan did not visit), but would be typical for the scene and time, 200 years ago. Another risk to bear in mind is that, with increasing popularity of topographical drawings and few libel laws, popular scenes were easily adapted or just copied, and students and amateurs were encouraged to do this for practice. We should not be surprised Relhan did on several occasions, and need to be alert for examples we have missed. Once this Collection is better known and understood more stories and explanations will emerge and we can start correcting mistakes and additions - please use the Feedback Form if you spot anything.

Downloadable images are available and should be credited 'Cambridge Antiquarian Society/Cambridge University Library'. For more information on Richard Relhan and the recent history of the collection see Richard Relhan Revealed.