'Save me from water, protect me from oil and from loose binding,
And do not give me into the hands of fools!' says the manuscript."

Anonymous verse frequently found at the end of manuscripts 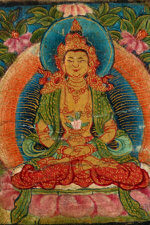 The history of South Asian studies at the University of Cambridge goes hand in hand with the history of its collections of South Asian manuscripts. In the late 19th century the Library began to acquire Sanskrit manuscripts collected in Nepal and India on the initiative of the Cambridge Sanskritist Edward B. Cowell and his successor Cecil Bendall. The collaboration of other scholars such as William Rhys-Davids and Georg Bühler, as well as of other professionals, enriched the collections with manuscripts hailing from different regions of the South Asian subcontinent and written in a wide range of languages, from Middle Indian (Pali and Prakrit) to Dravidian (such as Tamil and Malayalam).

While the greater part of collection had thus been constituted by 1900, the acquisitions continued through donation or purchase throughout the 20th century. In 1883 Bendall published a catalogue of Buddhist Sanskrit manuscripts in the University Library that included 248 items, and in 1906 Louis de la Vallée Poussin and Caroline Mary Ridding recorded basic descriptions of the remaining manuscripts on paper index cards. However, despite these early efforts, until now the collections have still not been fully catalogued and therefore remain not easily accessible to scholars of premodern South Asia and little known to the general public.

Now the AHRC-funded project “The intellectual and religious traditions of South Asia as seen through the Sanskrit manuscript collections of the University Library, Cambridge” has begun a systematic investigation aiming to produce a full catalogue of the manuscripts and to digitise a substantial proportion of them. These comprise more than 1,600 works in Sanskrit, Prakrit, Pali, Tamil and other ancient and medieval South Asian languages, produced over a time-span of more than 1,000 years, and written in over a dozen scripts and on different writing materials, such as paper, palm leaf and birch bark.

The project has provided further information on the conventions used in these manuscript descriptions.

Along with doctrinal, exegetical and ritual works issued from the many religious traditions of South Asia—from the Vedic religion to devotional Hinduism and Tantrism, from Theravāda to Mahāyāna and Tantric Buddhism, to Jainism—the Library’s holdings also include texts on a variety of “secular” topics, ranging from works of poetry and drama to treatises on philosophy, mathematics, grammar, astronomy, law, eroticism, medicine, archery, horse breeding, etc.

There is, in other words, a wealth here of cultural and historical information on South Asia of great potential significance for contemporary scholarship.