Scriptorium started life as a three-year (2006-2009) AHRC-funded Resource Enhancement Project, based in the Faculty of English at the University of Cambridge.

The project team created a digital archive of manuscript miscellanies and commonplace books from the period c. 1450-1720. These were drawn from the collections of ten partner institutions: college libraries in Cambridge (Emmanuel, King's, Queens, St John's, Trinity), the Cambridge University Library, the Brotherton Library in Leeds, and the archives of Holkham Hall, Belton House, and Lambeth Palace.

The initial Scriptorium website provided unrestricted public access to the manuscript images, and included a set of online pedagogical and research resources supporting late medieval and early modern manuscript studies. By gathering examples of different kinds of miscellany and commonplace book, it enabled users to explore and compare these distinctive and intriguing products of late medieval and early modern culture.

The images, now available in higher-resolution formats owing to the continued support of the partner libraries, are now part of the Cambridge Digital Library. Also included here are the detailed descriptions of the manuscripts, and other supporting information featured in the original site.

For further materials relating to Scriptorium, including essays on the manuscripts by selected scholars, and a link to the online palaeography module English Handwriting 1500-1700: An Online Course, please visit https://www.english.cam.ac.uk/scriptorium/. 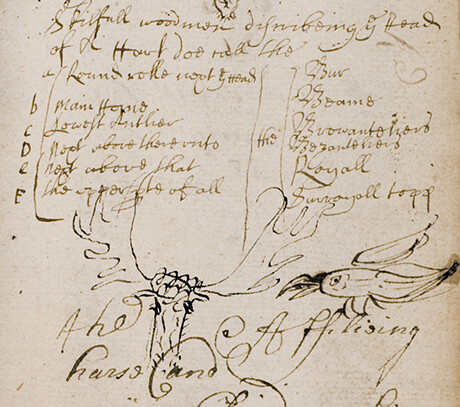 Funded by the Arts and Humanities Research Council.