Catch at the Sunne, devest him of his beame,
And in your eye wear his proud rayes; let day
Be when you smile, and when your anger points,
Shoot death in every frowne: covet a shade,
Affect a solitude, and books ..." 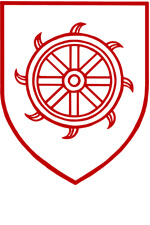 St Catharine’s was founded in 1473, as the ninth College of the University of Cambridge. Our founder was Robert Woodlark, one of the original Fellows of King’s College, where he was Provost from 1452 to 1479.

The College was named in honour of St Catharine of Alexandria, reputedly martyred in the third century A.D. We had three Fellows on our foundation, each dedicated to the study of philosophy and theology. There were no undergraduates until the mid-sixteenth century.

St Catharine’s remained small throughout the sixteenth and early seventeenth centuries, but broadened its teaching and study to include law, medicine, and mathematics. We grew piecemeal throughout the seventeenth century, obtaining land through bequest, donation, and purchase. Work on Main Court, as it is now known, finally ended in 1765, though even today remains incomplete, with the plan to build a grand library on the Trumpington Street side never realized. The College continued to expand out until, after the Second World War, we finally became an ‘Island Site,’ bounded by streets on all four sides.

Woodlark donated over one hundred manuscripts and printed books to his new College. Unfortunately, these volumes had disappeared by the time a catalogue was next compiled, in 1633. In the eighteenth century, however, the library expanded once again through the gifts of Thomas Neale (1705), John Addenbrooke (1718), Thomas Crosse (1728), Thomas Sherlock (1761) and others. Our catalogue of 1771 was, perhaps, the first printed general catalogue of one of the University’s libraries.

Today, our special collections comprise about 10,000 printed books, and over 65 manuscripts. Further details can be found on the College Library website.