I wrote not to be fed, but to be famous" 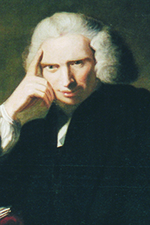 The Laurence Sterne and Sterneana collection is an output of the Sterne Digital Library project, 2019-2021, funded by the Arts and Humanities Research Council, which examines the workings and implications of long eighteenth-century literary afterlives. This site is in development and new material will be added as the project progresses.

Laurence Sterne (1713-68) burst onto the London literary scene in early 1760 from the relative obscurity of his life so far as a Yorkshire clergyman to his new-found role as a successful fiction-writer. The first two volumes of his wildly popular – and controversial – Life and Opinions of Tristram Shandy, Gentleman (1759-67) caused a wave of enthusiasm and criticism alike, while Sterne himself was celebrated as the latest literary sensation. He befriended the rich and famous, including actor David Garrick, and his portrait was painted by Joshua Reynolds, who depicted him in clerical garb but with a curling smile indicating his sense of humour, while a copy of his famous book rests on the table.

Tristram Shandy struck its first readers as a ‘ eccentric’, ‘striking’, ‘rare’, ‘tedious’, ‘singular’ and ‘ ingenious’, to quote just a few initial reactions. Sterne overturned what we might now consider to be the conventional features of a novel – a linear chronology and plot, for instance – to create an idiosyncratic narrative in which Tristram tells us the events and, most importantly, the opinions that make up his life story as and when they occur to him. He makes countless references to learned texts – some real, some invented – and weaves bawdry into his comic account of his family and his own upbringing. Sterne’s text also uses a striking, and provocative, array of typographical and graphic devices to capture the reader’s attention and to create – or to evade – alternative meanings that interact with (or run against) the text itself.

The success of the first two volumes of Tristram Shandy was so great that it quickly ran into a second edition – with an engraved illustration by long-famous William Hogarth – and Sterne was inspired to publish yet more works. Firstly, two volumes of his own sermons, cheekily published under the pseudonym ‘Mr Yorick’ – the name of the fictional parson who features in Tristram Shandy, and whose death is memorably marked by a black page. Sterne also went on to produce further volumes of Tristram Shandy, with a final ninth volume appearing in 1767. Sterne continued the witty, satirical, provocative strain of his first volumes in the work’s subsequent instalments, but also introduced new themes and elements too: he developed the touching, pathetic qualities associated with the highly popular Uncle Toby, for instance, and in sentimentalised scenes such as the narrator’s encounter with poor, mad Maria as he travels through France. Sterne thereby moulded his text to suit a wide range of audience tastes, and tried to keep his readers interested – although sales of the later volumes dwindled, and did not match the success of the first instalments.

In the final year of his life Sterne produced A Sentimental Journey through France and Italy (1768), in which the fictional Yorick is now the narrator, pursuing his own version of popular continental travel as he journeys ‘for the heart’: that is, to find the touching encounters and experience of human nature belong to the true man of sensibility. The text slips between touching pathos and suggestive innuendo, the reader never being entirely sure which path to tread, but perhaps ultimately accepting that a truly embodied man (or woman) of sentiment can be a person of feeling in all senses – carnal and spiritual.

From the outset, Sterne’s publications provoked diverse reactions well beyond the pages of the reviewing press. Many of his first readers turned their own responses to his works into creative forms of their own to create an immense and diverse array of Sterneana. This followed a widespread trend in the eighteenth century for producing what we might call ‘fan fiction’ inspired by popular and successful works. Sterne’s characters and key scenes appeared in countless new places, while many readers parodied his narrative style and graphic quirks. There were pamphlets, poems, plays, songs and full-length novels based on Tristram Shandy and A Sentimental Journey, while both texts also stimulated a huge range of visual material: paintings, book illustrations, prints, and objects featuring Sternean motifs, from fans to Wedgwood pottery. The sensation Sterne’s books created spurred the even more eclectic, lively, and fascinating phenomenon of adaptations in different art-forms and media, to bring one reader’s claim – that ‘Tristram is the fashion’ – to life in surprising new ways. Sterne himself, meanwhile, could rest assured that, after a startlingly brief burst of creative activity over less than ten years, he really had realised his ambition to be ‘famous’, in his own lifetime and in the afterlives of his work. Indeed, Sterneana continues to emerge to the present day: radio and television, film, and the graphic novel have all provided new contexts in which adaptations of Sterne’s works appeal to new times and places.

Cambridge University Library is gifted with an almost unique collection of Sterne-related materials. Thanks to the avidity of former librarian and collector J.C.T. Oates (1912-1990), it holds one of the most significant collections of Sterne’s work and of Sterneana up to about 1800. Important items also feature in the Library’s other holdings and in the collections of the University’s college libraries. Cambridge’s Sterne materials complement those held by the Laurence Sterne Trust at Shandy Hall, Coxwold – the author’s former Yorkshire home. This collection includes a considerable amount of visual material and of material objects related to Sterne and his works.

Sterne and Sterneana is a Cambridge Digital Library project that brings key highlights of these collections to new audiences. It showcases Sterne’s own publications, so that users can see and read these texts as they first appeared to his initial readers, and so feel something of how and why they captivated these readers’ fascination. The Sterne Digital Library project also brings readers a selection of some of the most important and interesting examples of Sterneana from 1760-1840, as found in Cambridge’s library holdings. All of these texts are rare, sometimes unique, but are now brought to new and even larger audiences than they first encountered. Side by side with Sterne’s own works and with each other, they collectively show what attracted readers’ attention in their source texts – and sometimes in their fellow adaptations – and how they reworked these elements into new forms and modes. These adaptations show popular trends – the reappearance of well-loved characters such as Toby and Maria, for instance – and how new writers were inspired by Sterne’s quirky narrative techniques to produce idiosyncratic takes on the novel, or on travel writing, of their own. Many reproduce and expand on the graphic experimentation Sterne helped to popularise, while others transport their versions of Sterne’s work into purely visual media in illustrations and other types of image.

Seeing and reading the collection of Sterne and Sterneana assembled here, and guided through it with a wide array of scholarly voices offering explanation and comment on these items, users can grasp a sense of the exciting sensation that Sterne’s works created in their day, and of the lively creative world of the late eighteenth century in which they emerged.