A power house and a testing station of educational activities" 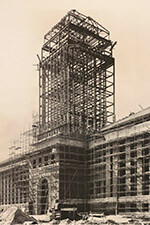 The momentous decision to move the University Library to a new location was taken by the Senate on 7 May 1921. The library had occupied the Old Schools since the fifteenth century, gradually expanding to fill almost the entire complex. By the early twentieth century the collections had grown to such an extent that crisis point had been reached. Piecemeal plans for further extensions on the old site or nearby were floated one by one and rejected. After briefly considering the Corpus cricket ground near Sidgwick Avenue (today the Sidgwick Site, but then considered too remote from the centre), the University settled on the playing field jointly owned by King’s and Clare Colleges, which had until recently been the site of the First Eastern General Hospital for casualties of the Great War.

Giles Gilbert Scott, already working on Clare College Memorial Court, was chosen as architect. Fundamental to the design brief was the principal of “open access”, whereby readers could gain easy and direct access to as high a proportion of the books as possible. Scott’s initial plans largely follow the outline of the library as built, but boast a restrained classical façade with a pillared entrance in the centre. In 1926, a visit by representatives of the John D. Rockefeller foundation prompted a change in the design. The master of Caius, Sir Hugh Anderson, was a prime mover in the project for a new library building, and he managed to interest the foundation in the plans. Rockefeller, however, did not approve of Scott’s initial drawings, and the architect was induced to revise his design on grander and more assertive lines, with the important addition of the tower, now the Library’s best-known feature, in the centre of the façade. With this alteration Rockefeller funding for half the cost of the new building was secured, and the first piles were driven on 29 September 1931.

These volumes record the process of building the library over the following three years, and the eight-week operation in June and July 1934 to transfer the contents from the Old Schools to the finished building. Two contain photographs taken by members of Library staff, notably Robert Pilgrim, one was compiled by heating engineers G.N. Haden & Sons, and the last by the consulting engineer to the project, Burnard Geen.