The Duke of Wellington, 19 June 1815, quoted by Thomas Creevey 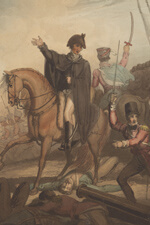 The Battle of Waterloo was fought on Sunday 18 June 1815, ten miles south of Brussels in what was then the Kingdom of the Netherlands. It was the climactic engagement of a campaign that pitted an invading French army under Napoleon Bonaparte against a combined force of Allied troops—chiefly British, Netherlandish and Hanoverian—commanded by the Duke of Wellington and a Prussian army led by Gebhard von Blücher. The French were routed, and the warfare that had plagued Europe for more than two decades was definitively ended: there were to be no hostilities on such a scale on the continent until the outbreak of the First World War in 1914. Through its impact on the politics and power-relationships of a Europe approaching the height of its worldwide influence, the outcome of Waterloo remains significant to this day.

After the French Revolution of 1789, Europe had been embroiled in twenty-five years of near-continuous war. Early attempts to subdue revolutionary France gave way to a series of conflicts in which successive coalitions of European powers struggled to deal with the expansionist ambitions of Napoleon, Emperor of the French from 1804. Following the failure of his invasion of Russia in 1812, Napoleon’s defeat at the Battle of Leipzig in 1813 left France itself vulnerable. Unable to force his enemies back, the Emperor abdicated in April 1814 and went into exile on the Mediterranean island of Elba. But late in February 1815, in a characteristic high-stakes gamble, Napoleon sailed for France at the head of a thousand soldiers. In just twenty-three days, he returned to Paris and took back the crown.

Russia, Austria, Prussia, Britain and their allies formed a new coalition, pledging to put vast armies in the field to force Napoleon from his throne. Napoleon realised that his best chance lay in striking decisively before weight of numbers could be brought to bear, and resolved to engage enemy forces garrisoned in the Netherlands. 128,000 strong, the French Armée du Nord crossed the frontier on 15 June. After two smaller engagements on 16 June, battle was joined at Waterloo on 18 June.

On both sides, objectives were simple. Napoleon sought to break the Allied resistance before the Prussians could arrive on the field. Wellington sought to hold ground and bleed the enemy of precious troops. Much of the Prussian army was marching towards Napoleon’s right flank. The battle at Waterloo was, as Wellington said the next day, ‘the nearest run thing you ever saw in your life’ . At five o’clock the Prussians were threatening French positions at Plancenoit. Around six o’clock, with the fall of Wellington’s central strongpoint, the farmhouse of La Haye Sainte, the French were winning. But two hours later, after the failure of Napoleon’s final assault, the Duke was able to order a general advance against a suddenly demoralised enemy: the French army broke and was driven from the field. The Coalition armies pursued Napoleon into France, and he abdicated for a final time on 22 June.

The battle’s importance was fully recognised by the generations which came after it. From the very first moment after the fighting stopped, soldiers and civilians alike wanted to put their experiences and emotions into words. The direct, first-hand writings of those involved in the battle were complemented by the works of literary authors. Both Byron and Tennyson described the battle as an ‘earthquake’, and Victor Hugo called it ‘the hinge of the nineteenth century’: ‘On that day, the perspective of the human race was changed’. For the British, Waterloo established a place in the national imagination by which it seemed to underwrite the country’s advance to global pre-eminence as the century progressed. Given the widespread fascination with the battle, Waterloo soon became a fashionable destination for travellers: many wanted to be ‘ an eye-witness of the very spot’ where history had been made.

The human cost of the Waterloo campaign for those who fought in it is impossible to quantify accurately, but the combined casualties of the campaign have been tentatively estimated at over 100,000 men killed, wounded and missing (including deserters). Large numbers of the wounded on both sides at Waterloo remained untreated until the days following the battle, and many died after protracted suffering. The vast majority of those killed in the battle were buried or burned on the field.

For the commanding officers, Waterloo had very different outcomes. Blücher was 72 at the time of the battle: having been raised to the rank of Prince after the peace of 1814, he returned to his estate in Silesia and died there in 1819. Wellington, after serving as Commander-in-Chief of the Allied occupation force in France, went into politics and was briefly Prime Minister from 1828 to 1830. He died in 1852, the quintessential British hero to many, although a symbol of political regression to others. It is Napoleon’ s reputation around which most controversy still clings. Exiled to St Helena, he died and was buried there in 1821, but his remains were repatriated to France in 1840 and entombed in splendour at Les Invalides in Paris. Yet appreciation of his qualities as a military commander cannot erase his despotism and warmongering as a statesman: ‘the enemy and disturber of the world’, as his adversaries styled him. Lord Acton’s famous judgement on power and corruption may be applied to Napoleon Bonaparte with particular force: ‘Great men are almost always bad men’.

Although Cambridge University Library has never set out to assemble a specific, single collection relating to Waterloo, the strength and breadth of our accessioning activity mean that over the course of two hundred years we have amassed a rich and fascinating variety of written records, maps and book arts relating to the battle and the era in which it played so significant a part. To mark the bicentenary of Waterloo, this Digital Library collection presents a sample of such material, encompassing military drill-books, manuscript letters, hand-coloured engravings, battlefield plans, printed mementos and tourist reminiscences.

An interactive BBC video of the making of the Waterloo collection, including detailed descriptions of some of the more important items, can be seen here.