…that noble College, established by the enthusiasm and devotion of a great community"

Professor Richard Jebb MP, Vice-Chancellor of the University, at the Opening of Westminster College, 17th October 1899 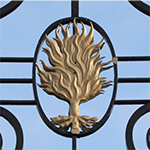 Westminster is a theological college and a resource centre for learning for the United Reformed Church.

Westminster’s story begins in London in 1844 as the Presbyterian Church in England’s theological college. The college did not move to Cambridge until 1899 when a site was given to the church by Agnes Smith Lewis (1843-1926) and Margaret Dunlop Gibson (1843-1920): twin sisters and biblical scholars of distinction, who spoke 12 different languages and travelled in Europe and the Middle East, who discovered and translated and published Biblical manuscripts and who uncovered the Cairo Genizah with Solomon Schechter - and who were generous benefactors of Westminster College.

In 1967, the College joined together with Cheshunt College, which had been founded at Trevecka, in Wales, in 1768 by Selina, Countess of Huntingdon (1707-1791), to train young men for ministry. The Countess of Huntingdon was drawn to Methodism and was a patron of George Whitefield; and as well as her college, she also founded 64 chapels in the Countess of Huntingdon’s Connexion. After her death in 1791, her college moved to Cheshunt, in Hertfordshire, from where many of the students found pastorates in Independent (and later, Congregational) chapels.

In 1905, Cheshunt College moved to Cambridge; and in 1967, Cheshunt and Westminster united on the Westminster site. This union of the two colleges pre-dated and pre-figured the union of Presbyterian and Congregational churches in England to create the United Reformed Church in 1972, when Westminster became a theological college of the URC. In 2006 the URC’s General Assembly accepted a report on the provision of ministerial training and wider learning across the denomination. This created Resource Centres for Learning, a designation and mission Westminster welcomed, and the remit of the College officially broadened to include provision of training for everyone in the churches, lay as much as ordained.

Westminster College is now home to the archives, rare books, and special collections of Westminster College, including some of Mrs Gibson and Mrs Lewis’s manuscripts and photographs; and those of Cheshunt College, including the correspondence of the Countess of Huntingdon. Westminster also houses the archives of both the Presbyterian Church of England and the Churches of Christ, together with the holdings of the United Reformed Church History Society, on behalf of that Society. For further information about the Archives and Special Collections at Westminster, see https://www.westminster.cam.ac.uk/rcl/research-archives.