Such a word is badly wanted, and if it were desirable to coin one, “Genetics” might do." 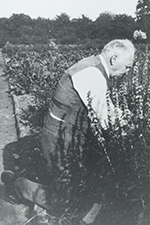 William Bateson (1861-1926) was a pioneering and controversial figure in the early history of genetics. Through his work on variation and inherited traits, Bateson effectively launched the modern study of genetics, coining the term ‘ genetics’ for the study of heredity and co-founding the Journal of Genetics (1910) and the Genetical Society (1919). A vigorous promotor of Gregor Mendel’s principles of heredity, Bateson was at the forefront of the rediscovery of Mendel’s work, translating and promoting his papers on plant hybridization, and often courting controversy with his outspoken views.

The collection covers the following broad subject areas: biographical items (including Bateson’s school reports and family correspondence); journals and letters home from his important tour of central Asia (1886-1887), where Bateson investigated the flora and fauna around the Aral Sea; material relating to his Cambridge career (including lecture notes and correspondence); records of his involvement with scientific topics and controversies (documenting a number of significant scientific debates including disputes with scientists who espoused the opposing theory of ‘biometrics’, as well as controversy over the teaching of evolution in America); publications (comprising drafts and notes for many of Bateson's key works); notes for public lectures by Bateson (1905-1926, including draft notes for the Silliman Lectures); records of visits and meetings (including field notebooks and documentation of various trips to the USA and Canada); and records of Bateson’s involvement with various societies and organisations.

A complementary series of notebooks recording Bateson’s and Punnett’s experiments in the breeding of poultry, sweet peas and rabbits, has also been digitised as part of the William Bateson project.

We owe a great debt to the industry of the late Alan G. Cock, geneticist at the University of Southampton, who laboured hard in locating and organising the collection, and obtained the enthusiastic agreement of William Bateson’s son, the anthropologist Gregory Bateson, to return the archive to Cambridge. Further papers of William Bateson are held by the John Innes Centre in Norwich.

For copyright reasons, not all material described has been digitised.

Funded by the Wellcome Trust
With many thanks to Dr Donald MacDonald, formerly Head of Genetics Department, University of Cambridge
By continuing to use the site you agree to the use of cookies. You can find out more in our help section.