Mr. Arnold was a pompous man, and because he made large Machines it must be right, and the fools followed him in his Blunders" 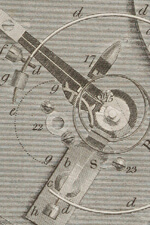 These printed works chosen to complement the archives of the Board of Longitude and related material comprise two groups: books printed on behalf of the Board; and a group of works related to its activities and to some of the disputes in which it became embroiled.

The Board of Longitude became a publisher of navigational and mathematical texts from 1767, following the decision to produce the astronomical tables needed to support the lunar distance method. Thereafter, publication grew to become its principal area of expenditure. The first publications were the Nautical Almanac and the Tables Requisite, the former published annually (and thus being the source of the bulk of the Board's spending on publications), the latter published only as needed, since it contained information that changed very slowly; its third edition appeared only in 1802. Between 1767 and 1828, the Board published around thirty different titles. These split into several key categories. By far the largest group was of mathematical and navigational tables, including the Nautical Almanac, the Sexcentenary Table (1779) by Jean Bernoulli and Michael Taylor's Sexagesimal Table (1780). The second group comprised accounts of production techniques or descriptions of specific instruments or machines, including The Principles of Mr Harrison's Time-Keeper (1767), John Bird's A Method of dividing Astronomical Instruments (1767), Jesse Ramsden's Description of an Engine for dividing Astronomical Instruments (1777) and descriptions of the timekeepers made by John Arnold and Thomas Earnshaw, the latter having to be re-published with Earnshaw's scurrilous comments about Arnold and the watchmaking trade removed. The third group of texts dealt with astronomical theory, notably Theoria lunae juxta systema Newtonianum (1767) by Tobias Mayer, detailing his theory of lunar motion. The Board also published results of the voyages and expeditions in which it was involved through the appointment of astronomers, including William Wales (ed.), The Original Astronomical Observations, made in the course of a Voyage towards the South Pole (1777) and Edward Sabine, . Lastly, there were a few works that the Board felt compelled to publish following attacks from critics such as Thomas Mudge. These included Nevil Maskelyne's An Answer to a Pamphlet, entitled "A Narrative of Facts," lately published by T. Mudge, Junior (1792).

The second group of printed works largely stems from disputes in which the work of the Board became entangled. This includes works relating to John Harrison's grievances with his treatment by the Commissioners, particularly from the 1760s onwards, and his ongoing attempts to secure full payment as set out in the Longitude Act of 1714. There is also a French translation of The Principles of Mr Harrison's Time-Keeper . A number of other works relate to the claims by Thomas Mudge and his son, which were finally resolved in Parliament in the 1790s, and a number that arose from the Arnold-Earnshaw dispute at the turn of the 19th century. This last group includes works by Alexander Dalrymple and Joseph Banks, supporters of John Arnold, both of whom vehemently defended Arnold and themselves from the savage criticisms of Thomas Earnshaw. Many of these were aired once more in Earnshaw's 1808 work, Longitude: An Appeal to the Public.