With the help of a proper nautical almanack, all the difficult part of the calculations by the lunar method might be taken away, and the remaining part to be done at sea might be practiced on board of every ship, if the persons belonging to it would give proper attention to it; but the calculations would be always somewhat conciser in the method by the watch than in that by the Moon" 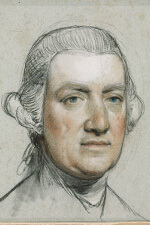 A selection of relevant items from the papers of Nevil Maskelyne, Astronomer Royal from 1765 to his death in 1811. As an ex officio Commissioner of Longitude, Maskelyne was deeply involved in all the work of the Board of Longitude, especially in making judgements on technical matters and the testing of methods and hardware. He was also in charge of the production of tables for astronomical navigation, including the Nautical Almanac, from directing and undertaking relevant observations in the Royal Observatory in Greenwich to organising the reduction of that data by human computers and arranging the printing of the Almanac.

The earliest volumes in this selection are an astronomical notebook and the Journal of his voyage to St Helena, which testify to his early involvement with lunar theory through his connection with Astronomer Royal James Bradley, and his successful attempts to find longitude at sea using the lunar distance method and the tables of Tobias Mayer. Similar observations and computations are included among the records kept during the voyage to Barbados on which the lunar distance method, John Harrison's H4 sea watch and Christopher Irwin's marine chair were all trialled in 1763-4.

The papers include an example of the core meridian observations made at the Royal Observatory, feeding into the production of the Nautical Almanac, and undertaken with instruments still on display at the Royal Observatory including the zenith sector, mural quadrant and an astronomical regulator, such as that by George Graham. There are several examples of the computations performed by one of Maskelyne's former observatory assistants, Charles Mason, for the production of lunar tables, correspondence with Henry Andrews and others regarding work for the Nautical Almanac and related matters.

Several volumes deal with trials of Harrison's and other timekeepers, including those by Larcum Kendall, John Arnold, Thomas Earnshaw and Thomas Mudge. Some of the trials took place on sea voyages, others at Greenwich. There are also notes taken during the famous 'discovery' of Harrison's H4 before a committee of the Board of Longitude. Extracts from a number of East India Company ships' journals, provide evidence on the use of lunar distances at sea. In addition there are observations of and some correspondence with the astronomers appointed by the Board of Longitude to carry out longitude and other observations on Naval voyages of exploration. There is further correspondence with astronomers, mathematicians and other colleagues, and on various methods, books and instruments.

The difficulties that occurred between the Harrisons and the Board of Longitude, and the accusations made against Maskelyne personally, are hinted at by the collection of extracts from the Minutes of the Board, which focus closely on interactions with Harrison. Maskelyne's roles, as an expert who carried out observations against which other longitude methods were tested and as a member of the Board that adjudicated them, left him open to criticism by those hoping to receive rewards. The papers here are testament to Maskelyne's close involvement with and painstaking work on both astronomical and timekeeping methods.