Business connected with chronometers, which (necessarily) is daily and peremptory, will always prevail over that which is general and confidential. I will not trouble you with an account of the various ways in which the chronometer business teazed Mr Pond, the Astronomer Royal" 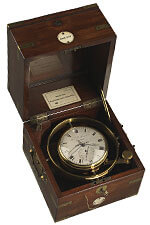 Four volumes of correspondence in the papers of the Astronomer Royal John Pond, covering the years 1821 to 1835, offer invaluable insights into the systems that let marine chronometers be used by the Royal Navy to determine longitude at sea. Born in 1767, Pond was trained by the veteran marine astronomer William Wales, who’d been on Cook’s second voyage, and was for some time enrolled at Cambridge University. With a large inherited private income, Pond set up a private observatory in Somerset in 1799, for which he commissioned an outstanding new instrument from the master maker Edward Troughton. Pond’s work challenged the existing Greenwich programme: he showed systematic errors in the Royal Observatory’s observations of southern stars and eventually encouraged Greenwich to overhaul its instruments.

When he succeeded Maskelyne as Astronomer Royal in 1811, Pond at once installed new Troughton devices and began to increase the observatory staff. His other administrative responsibilities, however, which included management of the Nautical Almanac and of the distribution of chronometers to the Royal Navy, were less prestigious and successful, as Pond grew ill, his assistant Thomas Taylor lapsed into drunkenness, and the Observatory system lapsed. These volumes of letters reflect the challenges and ambitions of this new administrative system.

Pond became the first Superintendent of Chronometers for the Royal Navy in 1821. Letters about this chronometric business, received from the first secretary Admiralty, John Wilson Croker, and his deputy John Barrow, are held in RGO 5/229-231, together with a companion volume of letters from the London clockmakers in RGO 5/233. The letters reveal the considerable problems of managing the checking, distribution and maintenance of marine clocks for Royal Navy ships. Agents had to be recruited to adjust clocks after they’d been sent from the Observatory to the docks and before they’d been moved to the ships. Repeated checks were required on the number of chronometers on board naval vessels, and to repair them when damaged. It had to be decided whether naval officers or mere accident were responsible for breakdown (RGO 5/229:197). When ships left without a marine chronometer, or clocks proved defective, they had to be replaced, sometimes by purchase from local makers elsewhere (RGO 5/230:25).

The correspondence also demonstrates the wide scientific and global significance of the system of chronometer distribution, whether in satisfying the demands of the New South Wales government for marine chronometers at a period when its own observatory was in disarray (RGO 5/231); or, as in 1826, when the energetic administrator Thomas Young, then foreign secretary of the Royal Society and secretary of the Board of Longitude, requested clocks to be used by the young Cambridge fellows William Whewell and George Airy in their deep mine trials in Cornwall on the density of the Earth (RGO 5/229:336).

From 1829, after the Board of Longitude had disappeared, responsibility for much management of the clock system began to pass to the Navy’s Hydrographer, Francis Beaufort. He proved adept at accounts of clock design, keen on an expansion of the naval stock of chronometers either through premiums from the Observatory or by purchases from private owners, and devoted strenuous attention to the trials of marine chronometers conducted at Pond’s Greenwich observatory. Much of RGO 5/233 is preoccupied with the fraught business of these trials. Strict rules governed clockmakers’ conduct during the trials and the conditions under which the clocks were to be tested (RGO 5/233:225). The manufacturers were acutely aware of the advantage to their repute of a successful Greenwich test. Testimony from these archives shows how, during this period, the Observatory was systematically passing responsibility for maintenance and repair to the clock trade itself, which played such a crucial role in the production and management of the global system of marine longitude.