Collecting has been a passion with me for as long as I can remember so it seemed the most natural thing to do to collect the works of Rupert Brooke, albeit in a casual sort of way, for their writing rather than as rare books" 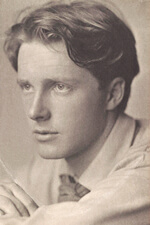 The images shown here represent a selection from the Schroder Collection, highlighting the friendships between Rupert Brooke, Edward Marsh and William Denis Browne. They show approximately half of the collection.

Each of these three figures had a significant impact within the arts, albeit cut short by war in the cases of Brooke and Denis Browne. Views on Brooke are constantly changing. Marsh is often remembered for his Memoir on Brooke, rather than his other achievements. Denis Browne has received relatively little attention, in comparison. These limitations within existing biography and the fact that the Schroder papers were a private collection until 2015 mean that despite the majority of the material presented here having been written more than a century ago, the papers still present a significant opportunity for original research.

Occasional notes and pencil annotations within the Schroder collection shed additional light on their provenance, for example there is a card by John Schroder inside Rupert Brooke’s attaché case and a pencil annotation also believed to be by Schroder in the guard book containing Brooke’s letter to Lascelles Abercrombie. The only marks added by archivists since the papers were acquired are the reference numbers, starting ‘ RCB/S/…’. It is unclear who foliated the guard books, although this may have been done by John Schroder.

Rupert Chawner Brooke was once compared to Apollo. He was famous for his good looks and his poetry, not least his patriotic war poems. Scholarly interest in him has not waned but the focus of this interest has shifted from his work to his lifestyle.