a place of education, religion, learning and research"

from the King's College Statutes 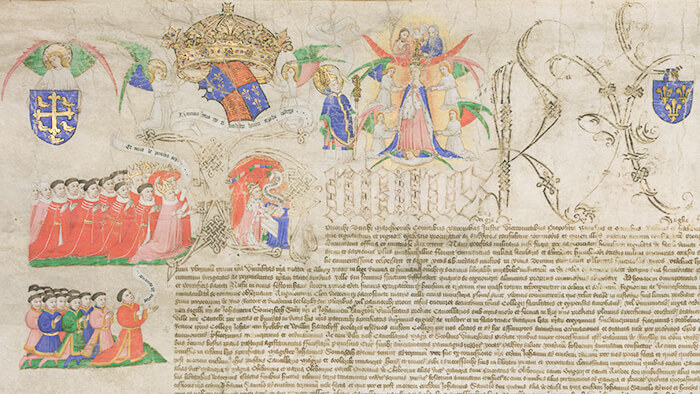 The King's College of Our Lady and St Nicholas in Cambridge, commonly known as King’s College, was founded in 1441 by King Henry VI.

From its foundation by Henry VI in 1441 to the present day, King's College has preserved records of its internal administration, the construction of its buildings, and the lives of its members.  The archives offer researchers outstanding sources for the study of architecture, religious upheaval, patterns of consumption, development of the curriculum, social and political history.  In addition, the archives include the administrative records of estates the College was given by Henry VI.

Henry VI's grand plan for the lay-out and buildings of his new College envisaged a Muniment Tower, originally four stories high, for the keeping of records. However, the Henry VI's grand plan went unfulfilled after building began in 1446, and for several centuries the archives were held in the Chapel's southern side chapels.

The Archive Centre’s collections are particularly strong in the fields of literature, fine art and economics, particularly the lives, cultural milieu and creative output of members of the 'Bloomsbury Group', and, to a lesser extent, musicology, computer science and anthropology. Arguably the most noteworthy collections of personal papers are those of John Maynard Keynes, E.M. Forster, Alan Turing and Rupert Brooke (including the Schroder papers, a selection from which is presented here).

Read more
By continuing to use the site you agree to the use of cookies. You can find out more in our help section.