I am a part of all that I have met" 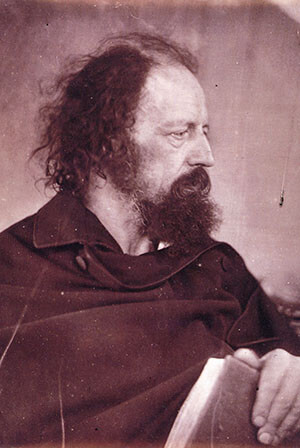 Cambridge is home to many of the most significant manuscripts of Alfred Lord Tennyson (1809–92), Poet Laureate and one of the most influential figures in the history of English Literature. The bulk of these materials are held at Trinity College, where Tennyson was a student between 1827 and 1831, and the Cambridge Digital Library has collaborated with the Wren Library at Trinity on this project. In 1897 the College was presented with the earliest extant full-scale draft of In Memoriam, Tennyson’s most famous poem, as a gift from Lady Simeon, to whom the poet had given the manuscript in 1886. In 1924 a bequest from the poet’s son Hallam of many of his father’s notebooks greatly increased the scope and significance of the collection.

The specific terms of Hallam’s bequest also restricted access to the relevant materials, however. A carefully-worded directive specified that:

"These original manuscripts are presented by Hallam Lord Tennyson on the understanding which is in accordance with his father’s objections to variorum readings such as those which had spoilt Wordsworth for him that no one shall be allowed to publish these manuscripts or use them for the purpose of variorum readings or do more than take short notes of them. On the other hand the Library is to have freest permission to exhibit them under proper precautions and the Donor would be glad that the fullest use should be made of this permission so that the manuscripts may be as far as possible constantly on view."

In an attempt to balance these competing demands, the manuscript of In Memoriam was on display, yet within a twice-locked glass case, to which only the Librarian and the Master of Trinity held the keys. Although researchers had been allowed to consult the notebooks in intervening years, it was only in 1969 that Trinity agreed with the family to lift the restrictions on their use, on the basis that the responsibility to preserve and clarify Tennyson’s work should take precedence over the specific terms of Hallam’s bequest. It is through an extension of this line of reasoning that those materials are reproduced here, in digitised form.

Despite (or because of) the complex history of Tennyson’s manuscripts, there remains at present no comprehensive scholarly edition of Tennyson’s poetic works. In addition to the specific issues described above, many further manuscripts are widely dispersed across the UK and the US, with significant material in the Tennyson Research Centre, in Lincoln, and in the Houghton and Huntington Libraries. The Tennysons Archive aims ultimately to bring together all such materials in one centralised digital library. As a first step, however, the present collection currently focuses upon the entirety of those materials held by the Wren. We are grateful both to the Master and Fellows of Trinity College, for agreeing to the digitisation process, and to the Cambridge Humanities Research Grant Scheme, for providing the necessary financial support.

The Tennysons Archive has two related aims. The first is, quite simply, to widen access to significant yet currently overlooked materials; in comparison to other significant nineteenth century poets (the Rossettis, Emily Dickinson), no such digital archive presently exists. There is moreover no comprehensive scholarly edition of Tennyson’s poetic work: the 32-volume Garland edition that was edited by Christopher Ricks and Aidan Day (1987–93) helpfully presents facsimiles of many of the manuscripts, but is on the editors’ own admission incomplete; nor can it hope to render the texture and detail of the documents in question as faithfully as can digital technology.

The second aim is that this digital collection precipitate a critical revision of Tennyson’s work, by revealing the full complexity of his compositional practice. One of the salient features of these manuscripts, which a standard scholarly edition will inevitably fail to render, is the frequency with which text interacts with other media. Tennyson’s sketches, doodles and artful tearing of pages all engage actively with his frequent redrafting of poetic material. The Tennysons Archive aims to demonstrate this dynamic relationship between image and text. So too does it ultimately aim also to incorporate music, in the form of the many settings and adaptions of Tennyson’s work. The poet’s wife, Emily Tennyson (née Sellwood) frequently set her husband’s work to piano; in so doing, she not only amended or transposed finished work, but also frequently played an active role in the ongoing compositional process. By demonstrating the unsuspected richness and variety of such associations, this collection aims both to consolidate and to redefine Tennyson’s status as one of the central literary figures of the nineteenth century.