The business of this Observatory is by no means confined to Technical Astronomy, but implies extensive relations with men of science generally, with officers of the Army and Navy, and with Constructors of Instruments of various kinds." 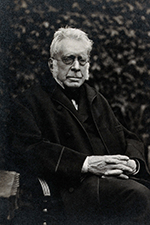 Sir George Biddell Airy (1801-1892) was Astronomer Royal and director of the Royal Observatory, Greenwich between 1835 and 1881. Under his directorship the Observatory was transformed into an organisation that embodied a factory mentality. Division of labour was implemented into every operation, and new instruments were installed which resembled heavy machinery. Telegraphic connections were set up to transmit daily time signals between the Observatory and London. The same wires also transmitted signals between Greenwich and other observatories around Britain and Europe. Airy also organised astronomical expeditions, including the British expedition to observe the transit of Venus in 1874 (https://cudl.lib.cam.ac.uk/collections/tov/2). He maintained the focus of the Observatory on its original aim of determining longitude by providing fundamental data on the position of celestial bodies. At the same time, he also expanded the work of the Observatory to make regular magnetic and meteorological observations. To accommodate the new departments and instruments, he altered the existing rooms and added new buildings to the premises, changes which were illustrated in drawings and watercolours by members of the Airy family and their friends (https://cudl.lib.cam.ac.uk/collections/rogart/1).

The role of an Astronomer Royal went beyond the limits of astronomy. The position has been characterised as one of scientific civil servant, which involved aiding the work of the British Government in matters related to science and technology. For example, Airy was appointed as an adviser to various scientific commissions throughout his life, including the Commission for the Restoration of the Standards of Length and Weight (Journal p. 26r) and the Royal Commission on Railway Gauges. His involvement in these matters showcased his expertise in engineering and mechanics. This was also evident through his frequent interactions with engineers and instrument makers, and through many of the new instruments of the Observatory constructed upon his own designs. Airy was also an active member of the scientific community, and served as the president of the Royal Astronomical Society and the Royal Society. He played an important role in founding the British Association for the Advancement of Science, and his connections to the government proved useful in lobbying them for additional funding and grants. At the same time, he was a divisive figure in the scientific community and was involved in various disputes. He was accused of halting funding for Charles Babbage’ s Difference Engine, challenged the need for new observatories, opposed the original designs of the Crystal Palace, and was blamed for John Couch Adams losing out on the discovery of Neptune.

The Airy papers also highlight the close connection between the Observatory and the British Navy. Throughout Airy’s directorship, the Observatory was still under the supervision of the Admiralty, and a Board of Visitors formally examined its operations on an annual basis. The work of the Observatory also involved testing of the chronometers used by the British Navy, which task demanded a large amount of time from the Observatory staff. In addition, naval officers frequently visited Airy at the Observatory to receive instructions in the use of astronomical and navigational instruments. For instance, the Astronomer Royal’s Journal for the years 1836-1847 recorded the frequent visits by the officers taking part in the North American Boundary Commission (Journal p. 72r).

The Airy Papers still survive under the same system in which Airy himself arranged them. This system helped in preserving the large amount of paperwork produced throughout the management of the Observatory. The survival of such a wide variety of records was due to Airy’s almost obsessive habit of keeping and organising records. His close friends jokingly stated that ‘if Airy wiped his pen on a piece of blotting-paper, he would endorse the blotting-paper with the date and particulars of its use and file it away amongst his papers’ (https://archive.org/details/royalobservatory00maun/page/116). He was also keen on organising any documents relating to the work of the Observatory. As a result, he was in charge of binding the Papers of the Board of Longitude (https://cudl.lib.cam.ac.uk/collections/rgo14/1), and documents left behind by previous astronomers. In addition, the bound volumes of correspondence between Airy and various individuals provide an insight into his interactions with men of science, instrument makers, naval officers, government officials and industrialists. Such a collection serves as a treasure trove of information about nineteenth-century networks of science, technology, industry, and politics. Yet, due to the extensive nature of the collection, large parts of it have remained unexplored by historians. This digital collection of manuscripts provides an additional avenue of approach for researchers of the Airy Papers. A full catalogue of the collection is available on Janus.