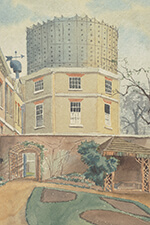 The family talent for art was passed down to both the Airy children and grandchildren. Perhaps the most beautiful items in the RGO artwork collection are the stunning watercolours of the Observatory [RGO 116/5/1- RGO 116/5/10] many of which were painted by Richarda’s daughter, Christabel Airy. Born at the Royal Observatory in 1842, Christabel was the Airy’s third daughter. Unlike their brothers, the Airy daughters were taught at home at the Observatory and Christabel spent her entire childhood and most of her adult life there. She was close to her father and accompanied him on his frequent travels. She never married and when her father retired she went to live with him at the White House on the outskirts of Greenwich Park, where she remained until her death in 1917.