The magic voice of Greece where the violet sunsets glow
O’er heroic cities of kings sung by Homer long ago.” 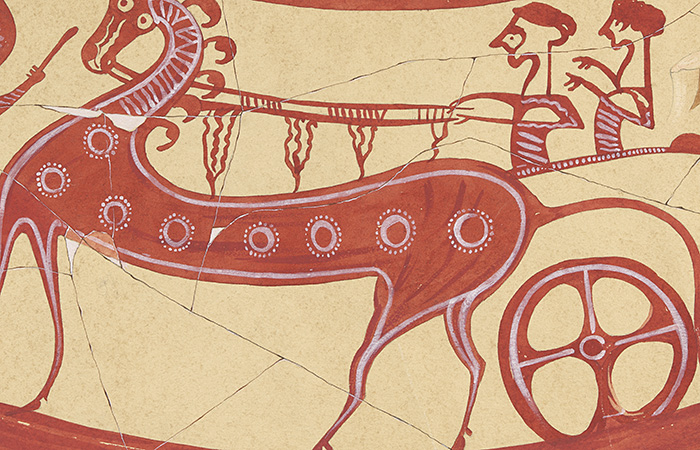 A horse and chariot with two charioteers – detail from a 14th-century BCE ceramic vessel excavated in 1952 at Mycenae. Drawing by Piet De Jong (MCNE-2-3-05).

The Mycenae Archive presented here draws on the core collection in the Archives of the Faculty of Classics at the University of Cambridge. The collection principally consists of notebooks, drawings, plans and photographs of the archaeological endeavours of the team of the British School at Athens at Mycenae in 1920-1923, 1939 and 1950-1957 under the directorship of Alan John Bayard Wace (1879-1957). Some of the documents presented here are housed in two collections held physically in the British School at Athens (BSA): the Mycenae Excavation Records and as part of its BSA-Society for the Promotion of Hellenic Studies (SPHS) Image Collection.

To celebrate 100 years from the start of Wace’s work at Mycenae in 1920, we have united digitally this collection to offer the public and the scholarly community this resource for perusal in the hope that it will inspire, spark new questions and debates, and advance our knowledge of this key site for the history of early Greece and of the Mediterranean as a whole.

Alan Wace was one of the leading archaeologists of early Greece in the 20th century. He read Classics at Cambridge before becoming a student at the British School at Athens in 1902 and spending over a decade travelling and researching new sites in Greece. He was Director of the British School from 1914 to 1923 and his first excavation in this post was at Mycenae. Wace went on to develop a highly successful career with great distinction and is today remembered for his outstanding work at Mycenae and in Mycenaean archaeology.

Wace’s excavations at Mycenae began on St George’s day, 23 April 1920. The work at the site clarified significantly the chronology of Mycenae’s monuments, especially the sequence of use of the various areas outside and within the fortification walls – an issue that had remained open ever since Heinrich Schliemann’s startling discoveries there in the 1870s. Wace’s work showed that Schliemann’s Grave Circle, with its spectacularly rich-in-gold burials in shaft graves, was part of a larger cemetery and that the circle itself was of a later date than the tombs within it. The palace and several Mycenaean houses in the citadel were cleared, revealing evidence for different phases of occupation, while study of the monumental tholos tombs showed that they were later in date than the shaft graves. Wace and his team also carefully excavated a series of rock-cut chamber tombs. Although these discoveries may seem less spectacular in a way than Schliemann’s rich graves, their fundamental significance is that they helped establish the basis on which the chronology – and therefore the intelligible history – of Mycenae, and subsequently of Mycenaean civilisation, came to be founded. Wace’s prompt and exemplary publications made data available to the scholarly community and prompted further research, discussion and debate.

In 1934, Wace was elected Laurence Professor of Classical Archaeology at Cambridge – a post that he held until 1944. His return to Mycenae, in the summer of 1939, coincided with his sixtieth birthday. This single campaign provided further support for his dating of the ‘Treasury of Atreus’ – the most elaborate of Mycenae’s tholos tombs – in the 14th century BC as opposed to the earlier date suggested by Sir Arthur Evans, the doyen of Minoan (prehistoric Cretan) archaeology. Further excavations at Mycenae were delayed by the Second World War. Wace, however, returned to the site in 1950, where he continued to excavate until 1955, with study seasons in 1956 and 1957. This work explored further Mycenae’s prehistoric cemetery and brought to light important structures outside and inside the citadel, spanning the prehistoric to the Roman periods. In 1952, Wace and his team discovered the first Linear B tablets in context at Mycenae, a finding that complemented, on mainland Greece, similar earlier discoveries by the famous American archaeologist Carl Blegen at Pylos in the Southwest Peloponnese. That same year, the architect and amateur archaeologist-linguist Michael Ventris startled the world by announcing the decipherment of Linear B as a script that recorded an early form of Greek.

Throughout his life Wace received wide recognition, including the Petrie medal for distinguished work in archaeology (1953). On the 9th of November 1957, he passed away in Athens at the age of 78. His work at Mycenae was continued by Lord William Taylour and his daughter, Dr Elizabeth B. French, herself a distinguished archaeologist and later Director of the British School at Athens (1989-1994). Wace’s legacy remains as strong and pertinent as ever. Mycenae is today a UNESCO World Heritage site visited by thousands of tourists every year.

This digitised collection unifies online material held in Cambridge and at the BSA in Athens amounting to almost 5150 pages of 80 excavation notebooks from the years 1920-1923, 1939, 1950-1957. It also includes more than 1700 photographs and over 600 drawings and plans of Mycenae’s remains, within and outside the citadel walls, and of small finds from Wace’s excavations. Unlike edited printed publications, the digitisation of this archival material allows the viewer to form a sense of the nature of the physical documents and to witness history in the making. These records are invaluable in helping specialists do archaeology in reverse – from physical records in digital format working their way back to the excavation trenches and individual finds – and in allowing all those interested in Mycenae’s past to get closer to the day-to-day activities of pioneers in archaeological fieldwork.

Highlights include Alan Wace’s original notes and thoughts on the progress of the excavation work at Mycenae, the astonishing colour drawings of reconstructed frescoes, jewellery and other finds from Mycenae by Piet de Jong as well as his detailed architectural plans of tombs and architectural remains. The notes of Winifred Lamb and Walter Heurtley, accompanied by numerous sketches, offer vivid accounts of an archaeologist’s tasks at work. Lulu Eldridge made some spectacular off-the-cuff, pen and ink pottery drawings in two tiny notebooks, while photographs captured candid moments in the process of excavation, unremarked in the written record, that connect us with immediacy to life on an active dig a century ago.

One can easily recognise in these records the team effort, the intricacies of archaeological work and, above all, how invaluable it is to preserve them for posterity. Archaeology is destructive, which is why recording is so important. The present collection enriches the records of the excavation of Mycenae, which no longer exists in the state it did before excavation began. We wish you pleasant browsing and we welcome your suggestions and feedback!

More information on the Mycenae collections at the British School at Athens can be found here: https://digital.bsa.ac.uk/index.php
If you require further information about the Faculty of Classics Mycenae Archive, contact archives@classics.cam.ac.uk.

Read more
We are grateful to the Gladys Krieble Delmas Foundation, the Faculty of Classics (University of Cambridge) and Dr Elizabeth French for assisting financially with the digitisation of the Mycenae Excavation and Publication Archive to coincide with the Centenary of the commencement of Alan Wace’s work at the site. We would also like to thank the British School at Athens, Robert McCabe and the Benaki Museum/Photographic Archives-Nikolaos Tombazis Collection (FA.10) for providing material and copyright permissions.
By continuing to use the site you agree to the use of cookies. You can find out more in our help section.