Here lies one who did most truly prove,
That he could never die when he could move" 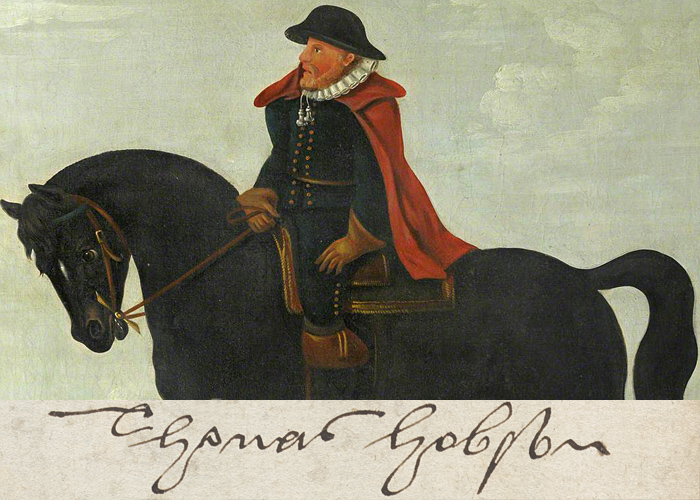 Thomas Hobson (1544-1631) is Cambridge’s most famous townsperson. Using sturdy wagons pulled by a large team of horses, he was a carrier of goods and people. He also hired out horses and thereby introduced the expression 'Hobson's Choice' ('this or none') into the English language; it arose from his stipulation that a customer should ride only the most rested animal. Hands-on until he died aged 86, he became an institution and amassed immense wealth. Hobson was born around 1544 in Buntingford, a stopping-place 22 miles south of Cambridge on the road to London. His father, a carrier, had probably moved from Lincolnshire to expand his trade. The family re-located again in 1561 to Grantchester, just outside Cambridge. After Hobson inherited the carrier business in 1568, the family settled in Cambridge’s academic quarter at Ye Sign of the George on Trumpington Street. Acquired from Corpus Christi, the inn had barns, stables, garden and an orchard, approximately where St Catharine’s chapel is now situated.

Aged 33, he married Anne Humberstone. They were dedicated parishioners at St Bene’t’s, where their eight children were baptized. Hobson donated a King James Bible to the church, helping to secure for himself a revered resting place, without inscription, near the chancel. Thomas Fuller, man of letters (then aged 22), officiated at his funeral.

Tradition has graced Hobson with a reputation as a civic philanthropist. Yet his payment for a fountain in the market-place was curiously retrospective and his gift towards 'Hobson’s Workhouse' was likely linked to other matters. He provided generous maintenance for the fountain (also known as a conduit) but, over time, the entire 'new river' system became misleadingly known as ‘Hobson’s Conduit’.

Hobson’s more evident aspiration was to use his resources to settle his successors, their spouses and families in fine manor houses, supported by rents and profits from estates attached with lordships of the manor. Three manors at Cottenham were bequeathed to his grandson Thomas, his main male beneficiary. Another grandson Charles was comfortably established in Chesterton. When his daughter Dorothy married Sir Symon Clarke, the carrier discharged the baronet’s heavy mortgages and ensured that the estates would accrue to her; an imposing portrait, dated 1620, of Hobson on a stately horse likely acclaimed her aristocratic elevation. His other surviving daughters were set up in the splendour of former monastic properties: Elizabeth at Anglesey Priory endowed with the manor of Anglesey-cum-Bottisham and Anne in Denny Abbey with the manors of Waterbeach and Denny. University records reveal Thomas Hobson, largely, as a measured operator. Economic expansion and wider access to education during this era assisted the emergence of an increasingly sophisticated urban merchant class. Hobson’s considerable accumulation of capital - derived from hard work, reliability and enterprise - was used to fashion privileged lives for his family as mid-ranking landed gentry. Hobson died in January 1631 during a period of inactivity caused by plague. In epitaphs, John Milton attested the University Carrier’s indefatigability: Here lieth one who did most truly prove, That he could never die when he could move.

Nigel Grimshaw (Queens' 1971) has funded a pioneering research initiative at the UL into the University’s archives using documents that had not yet been transcribed. In many cases, this involved deciphering the idiosyncratic shorthand of the Registrary. Nigel is a member of the Library’s Advisory Board and a leading expert on Thomas Hobson.

Hobson features in the records as businessman, benefactor and bereaved father in the period 1587-1631. As such, his encounters with the University of Cambridge reflect its wide-ranging influence on local trade, welfare and public health; its importance in local social and economic history. They serve as a town-gown case study.

He was both plaintiff and defendant in the University courts, disputing with other tradesmen or the University authorities in cases relating to his business as carrier, as well as a side-line dealing in wheat, the extent of his property portfolio and the debts of his son, John.

He was first among the parishioners of St Bene’t’s donating towards almshouses and a House of Correction and supported a petition for poor relief. His haulage operation was subject to the orders issued to keep the town free of plague.

Scope and arrangement of digitised records

The records of University courts are among the University Archives at the University Library. A catalogue is online at https://archivesearch.lib.cam.ac.uk/repositories/2/archival_objects/7902. For the two principal courts, those of the Vice-Chancellor and his Commissary, from the early sixteenth to the mid-nineteenth centuries, they comprise chronological series of Act and Deposition Books, bundles of evidence and other administrative records produced in court (known as exhibita) and probate material.

Close descriptive work on the Vice-Chancellor's Court records has revealed many references to Thomas Hobson. Similar analysis is outstanding for the records of the Commissary’s Court. This selection documents cases where Thomas Hobson is party to a suit or otherwise appears, for example as witness or creditor. His son, Thomas junior, features in one case. It also includes, from elsewhere in the archives, records relating to Hobson and poor relief, and Hobson and plague.

Digitisation has allowed records to be presented together for the first time, in thematic groups by court case or other appearance; i.e. by discrete ‘episode’. Each episode has an introductory summary and contents list to aid interpretation and navigation. Except for entries in the courts’ Act Books and pro forma documents appointing lawyers or summoning defendants, all records are transcribed. Latin abbreviations have been extended; spelling and punctuation transcribed as seen. To view the transcription alongside the digital image, click on ‘View more options’ and then ‘Transcription (diplomatic)’.

Nature and authority of University courts

From successive monarchs the University accrued extensive juridical independence and authority in civil and ecclesiastical matters. By the reign of Elizabeth I, its courts were empowered to try cases affecting University members and other ‘privileged persons’ (that is, any townsperson providing a service to a University member) in the areas of felony, probate, licensing, debt, morality and discipline. In doing so, they competed with local borough and church courts.

The most important court, the Vice-Chancellor's Court, dealt primarily with cases concerning senior members and in pursuit of its regulative authority. Probate was also processed here. The second, the Commissary’s Court, largely heard cases involving junior members and privileged persons. It sat in the University and, in special sessions commonly called ‘Pie-powder Courts’, at Midsummer and Sturbridge Fairs. The Proctors’ Leet heard cases concerning breaches of the peace, illegal gaming and offences against trade in victuals, licensing and weights and measures. In the Paving Leet, the University worked with the town authorities to agree sanitary measures, among them plague control. The two principal courts were at their most active in the period 1540-1660.

For further background information see the catalogues of court records at https://archivesearch.lib.cam.ac.uk/repositories/2/archival_objects/8058.

Procedure in the Vice-Chancellor's and Commissary’s Courts

Cases were divided between office causes, brought by the University in exercise of its authority, and instance causes brought by everyone else. Following civil law procedure, the Vice-Chancellor or Commissary acted as judge and jury, the Registrary as clerk, the Proctors as police and Law graduates as ‘proctors’ or representatives of the disputing parties.

Cases were initiated by the plaintiff issuing a ‘libel’ or written statement of the case followed by a citation of the defendant. Non-attendees were pronounced contumacious and could be fined or imprisoned. On appearance in court, the defendant responded to the libel and in a responsio personalis (personal response) could deny or admit the charges. Once any part of the libel had been denied, it was thereafter referred to as allegations which the plaintiff would be required to prove. Written evidence was presented in the form of depositions (witness statements) in response to allegations, interrogatories (questions) and other documents, such as account books and bonds, submitted by both sides and filed for reference. Once the judge felt sufficient evidence had been gathered, he assigned a term ‘to propound all acts’ and set a deadline for concluding the case and finalising the evidence. Thereafter, he fixed a date for judgement, sentencing and issue of an expenses bill, outlining fees incurred and payment plan. Many cases settled out of court without going the full course.

For further background information see the catalogues of court records at https://archivesearch.lib.cam.ac.uk/repositories/2/archival_objects/8058.

For a bibliography see the catalogues of court records at https://archivesearch.lib.cam.ac.uk/repositories/2/archival_objects/8058.

Nigel Grimshaw (Queens' 1971) has funded a pioneering research initiative at the UL into the University’s archives using documents that had not yet been transcribed. In many cases, this involved deciphering the idiosyncratic shorthand of the Registrary. Nigel is a member of the Library’s Advisory Board and a leading expert on Thomas Hobson.
By continuing to use the site you agree to the use of cookies. You can find out more in our help section.