A map says to you, 'Read me carefully, follow me closely, doubt me not.' It says, 'I am the earth in the palm of your hand. Without me, you are alone and lost.'

Beryl Markham, West with the Night 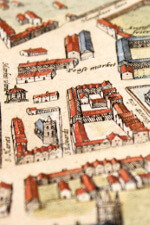 Maps are powerful objects, created and used for many varied reasons. They can be works of art, a means of propaganda, reflections of power and status, or tools for navigation. They give you the chance to follow the footsteps of those who lived centuries ago and to view the structures that would have been visible to them at the time.

By some estimates as much as 80 per cent of information circulating in the world is related to geospatial location.  To gain the most from that information you will probably need to know more about that place – where it is; what it is like; how it relates to other locations; how it has changed through time. The Map Department of Cambridge University Library with its 1.3 million maps and over 40,000 atlases and books on cartography can help you to answer these questions (and many more).

The printed and manuscript maps and atlases in the Map Department cover the whole world in a range of scales, from detailed topographic maps showing the lie of the land and the man-made features resting upon it, to world maps showing ocean currents or time zones.  The maps were compiled for a variety of purposes – through propaganda to art and science – and show different types of information, like geology, climate, transport, streets and historical events.  Items in the collection range in date from the 15th century to the present day and as well as being used to tell the history of a place, they can be studied in their own right as works of art, as reflections of the society in which they were made, as a means of understanding how such items were made and why.

Maps can also be found in other Digital Library collections such as Treasures, Waterloo, Board of Longitude and the Royal Commonwealth Society collections and have a look at Lancelot 'Capability' Brown’s map of The Backs at Cambridge (UA P.I.3)